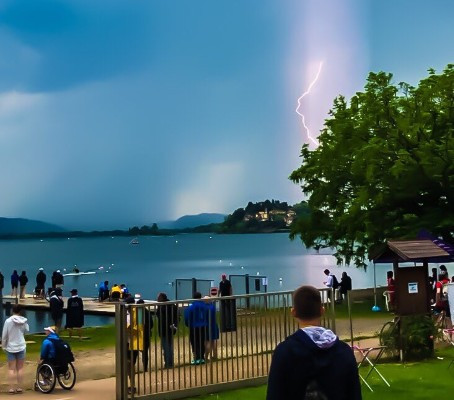 A torrential lightening storm caused heats action to be postponed for the day in the afternoon.

But Polianskyi had no problems in easing to victory in heat two of the men's PR1 single sculls in 12min 4.08sec.

Benjamin Pritchard of Great Britain finished a distant second in the heat in 13:10:13.

Another Briton joined Pritchard in the final as Andrew Houghton took heat three in 11:55:30.

The two other heats were both won by Frenchmen.

Hectic afternoon at the Gavirate Para-rowing regatta. Lightening has seen racing postponed, but before it was called off both Andy Houghton and @BenjaminPritch1 secured their places in the PR1 M1x final tomorrow ? #gbrowingteam pic.twitter.com/mJE4a7oMt6

Australia's four-time world champion Erik Horrie was a non-starter in the opening competition of the season.

On the women's side, Germany's Sylvia Pille-Steppat was the fastest qualifier in a time of 14:26.80.