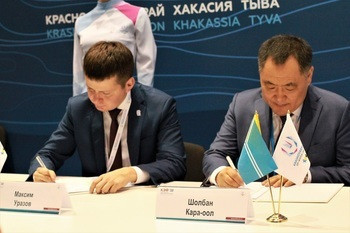 Organisers of the 2019 Winter Universiade in Krasnoyarsk have signed agreements with the local Governments of the Republics of Khakassia and Tuva to have the Games’ Torch travel through their regions.

The agreements were signed as part of the Krasnoyarsk Economic Forum,with the leaders of the two Republics, which both border the Krasnoyarsk region, now set to start making plans for the running of the torch relay in their territories.

Chairman of the Government of the Republic of Khakassia, Andrei Novoselov, claimed his region was delighted to be taking part in the relay.

"The 2019 Winter Universiade is not only an event for Russia but for the whole world and we are very glad to be a part of this," he said.

Chairman of the Government of the Tuva Republic Sholban Kara-ool said: "We are children of the same river and we should support each other"Kara-ool addedKara-ool added

Kara-ool added; "Of course, we are very glad that such an important event, which will have a great impact on the development of sport as well as the image of Siberia and Russia as a whole, is taking place in the Krasnoyarsk region."

"In Tuva, we will take all measures to ensure the torch relay is beautiful and attracts a large number of people, especially the young."

The Torch Relay is due to visit iconic places of each city on the route with local organisers tasked making the necessary preparations.

Following this latest agreement, Krasnoyarsk 2019 director Maxim Urazov said that the Krasnoyarsk Economic Forum, which has also witnessed other deals related to the Universiade being signed, was becoming not only a platform for economic issues, but also for the promotion of events in the region.