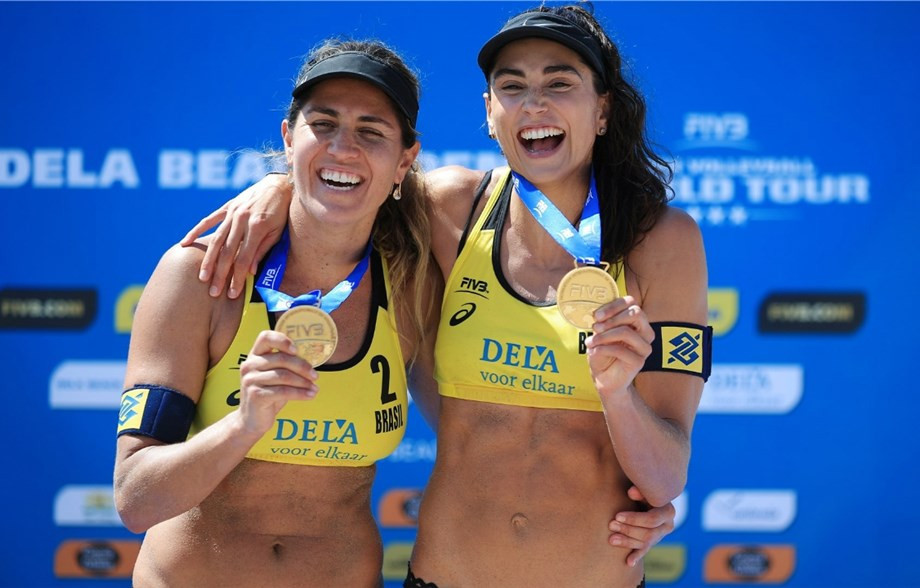 Brazil have announced a strong line-up for the women’s section of the 4-Star Dela Beach Open in The Hague, The Netherlands, the opening tournament of 2018 in the Beach Volleyball FIVB World Tour.

Agatha Bednarczuk and Eduarda ‘Duda’ Santos Lisboa are headline acts having won silver at the 2017 World Tour finals to mark the end to a strong first year as a team, a year in which they have also won gold, silver and bronze at World Tour events.

They won gold in Xiamen in 2017, but have been unable to find their way onto the podium elsewhere.

The Tour will run until the Beach Volleyball FIVB World Tour Finals in August.

There is a less experienced feel to the Brazilian men’s teams.

Leading the changes is the vastly experienced Pedro Solberg who will play with George Wanderley, one of the up and coming stars of Brazilian beach volleyball.

He won his first World Tour gold at the Espinho 2-Star event in 2017, and previously won both U21 and U19 FIVB Beach Volleyball World Championship titles.

Hosts the Netherlands have entered seven teams in the men's and women's events.

Alexander Brouwer and Robert Meeuwsen will aim to start the year in the same way that they began 2017 when they won gold in Xiamen.

Sanne Keizer continues her return to the World Tour having stepped down at the end of the 2014 season.

She teamed up with fellow Dutch Olympian Madelein Meppelink in 2017 and featured at The Hague 3-Star tournament.

They will be up against America's April Ross who will begin a new chapter of a career that has featured Olympic silver and bronze medals and 2009 World Championship gold, alongside Alexandra Klineman.

The duo are being coached by Jennifer Kessy, who played with Ross when they won the 2009 world title and London 2012 silver.

They missed out on retaining their European title when they lost to Italy’s Daniele Lupo and Paolo Nicolai.

In the men's event Dutch duo Alexander Brouwer and Robert Meeuwsen will be looking to put a disappointing year behind them on home sand.

The Dutch pair began 2017 in good shape and won gold at the Xiamen 3-Star Open, but thereafter they struggled to consistently find their best form.

“2017 was a poor season for Robert Meeuwsen and me,” Brouwer told the Dutch Volleyball Federation website.

“We started with gold at the Xiamen Open in China, but after that we were unable to achieve our goals. In particular, the defeat against the Belgians Koekelkoren and Van Walle in the first knockout round at the World Championships in Vienna was disappointing.”

The Dela Beach Open runs from January 3-7 at the SportsCampus Zuiderpark indoor arena.