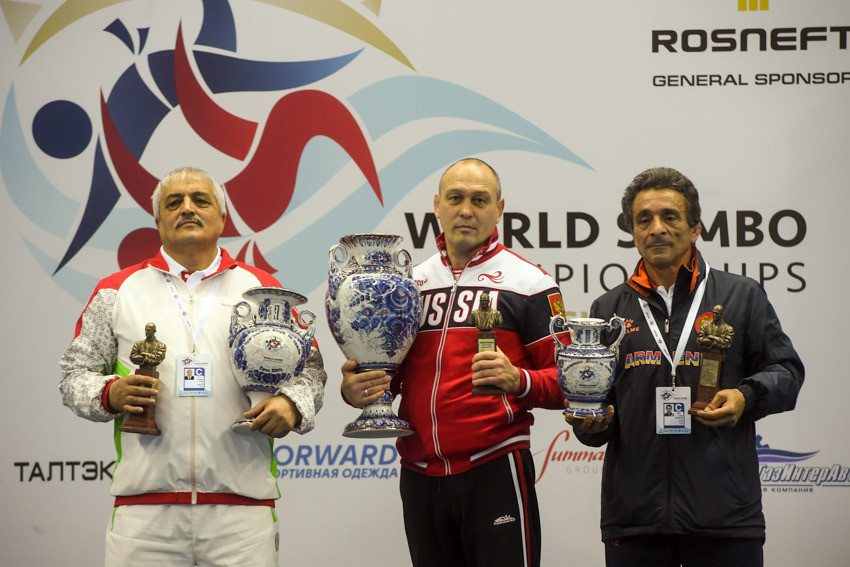 Hosts Russia claimed a further seven gold medals on the last day of action at the 2017 World Sambo Championships to finish well ahead of their nearest challengers in the final standings with 17 overall.

The home nation won all three of today’s women’s competitions with Tatyana Kazenyk, Marina Mokhnatkina and Anzhela Gasparyan coming out on top in the 56 kilograms, 68kg and over 80kg categories respectively.

Kazenyk beat Bulgaria’s Kalina Stefanova 7-0 in the 56kg final before Mokhnatkina retained her 68kg title and became a five-time world champion with a swift win over Belarus' Anzhela Zhylinskaya.

Gasparyan then defeated Georgia’s Elene Kebadze 1-0 in the over 80kg final.

Completing the over 80kg medallists were Cameroon’s Chantal Fokou and Ukraine’s Galyna Tarasova.

Kazakhstan’s Nurgeldi Kiyalbekov and France’s Antoine Lefevre were the 68kg bronze medallists, while third-place honours in the 90kg went the way of Czech Republic’s Lukas Turecek and Bulgaria’s Mariyan Dimitrov.

In the men’s categories, Russia’s Sergey Kiryukhin and Artem Osipenko defended their respective 82kg and over 100kg crowns.

Rounding out the over 100kg podium were Ukraine’s Stanislav Bondarenko and Cameroon’s Claude Kouamen.

There was disappointment for Russia in the men’s 62kg final, which saw home favourite Aslan Mudranov lose 2-1 to Kazakhstan’s Yesset Kuanov.

In the one final held this evening that did not feature a Russian athlete, Armenia’s Grigor Mkhitaryan beat Kygyryzstan’s Mukhametali Ergeshev to the combat men’s 52kg title.

Next year's edition of the World Sambo Championships is due to take place in Romania's capital Bucharest.