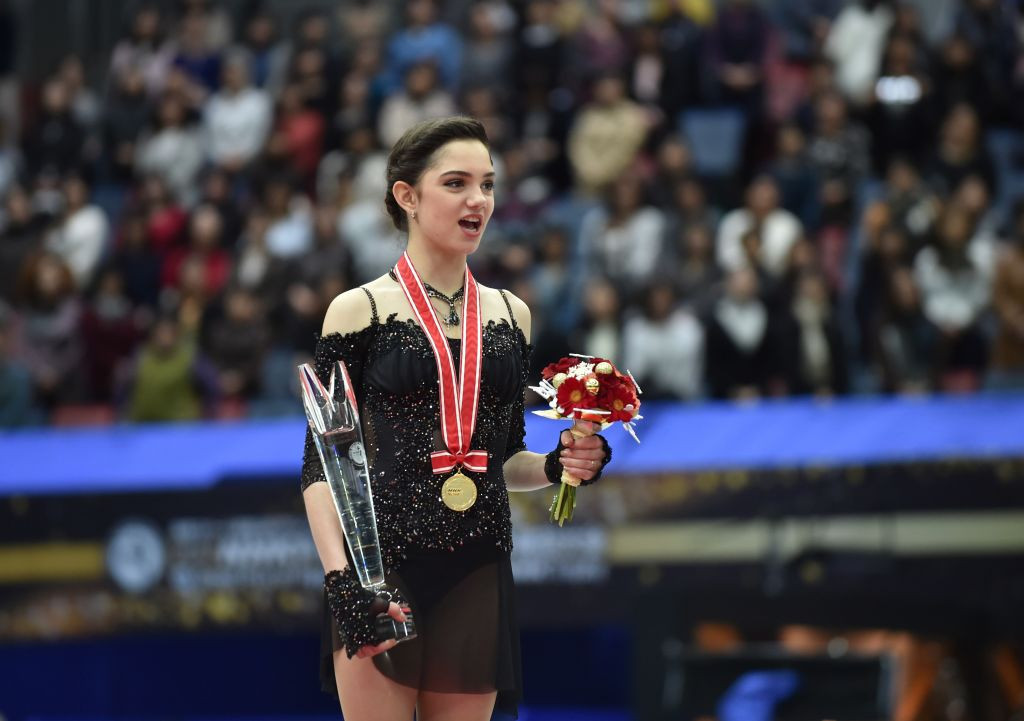 Medvedeva had to overcome a shaky start to her dramatic programme to Anna Karenina after falling on her opening triple flip and stepping out of the landing of the triple Lutz at the Japanese city's Municipal Central Gymnasium.

The two-time world champion composed herself to produce a triple flip-triple toeloop and triple Salchow-triple toeloop combination as well as a triple loop, two double Axels and level-four spins and footwork.

"I am not satisfied with my free skating, but I am glad that I did my triple flip-triple toe combination in the second half of my programme," Medvedeva said.

"That was the best part of my programme today.

"My main goal is always trying to do my best, not only for the result, but first of all for my soul."

In a repeat of the result at last month’s Rostelecom Cup in Moscow, five-time European champion Carolina Kostner of Italy claimed the silver medal behind Medvedeva.

Kostner’s elegant and fluid performance to Afternoon of a Faun by French composer Claude Debussy featured a triple flip-double toe combination as well as three more triple jumps and exquisite spins and footwork.

The 2012 world champion, however, doubled a toeloop and fell on a triple Salchow.

Russia’s Polina Tsurskaya earned the bronze in her debut at a Grand Prix of Figure Skating event.

The 16-year-old produced a clean programme to Nocturne in F Minor Op. 55, by Polish composer Frédéric Chopin, and Song for the Little Sparrow, reeling off seven clean triples, including a triple Lutz-triple toe combination and difficult spins and steps.

The Lillehammer 2016 Winter Youth Olympic Games champion set a personal best in the free skating with 140.15 points and was second in that segment of the event.

Overall, she remained in third place on 210.19 points.

In the men’s event, Russia’s Sergei Voronov claimed the first Grand Prix gold medal of his long career at the age of 30.

Voronov, who was the oldest man in the competition, delivered an emotional and powerful performance to Sarabande Suite, nailing a quad-triple toe, two big triple Axels as well as three more triple jumps and solid spins and footwork.

The two-time European medallist set a personal best with 181.06 points in the free skating and racked up 271.12 overall.

His only glitch came when he two-footed his second quad toe.

"Without any doubts, I am happy to have won this competition.

"There were some questions today in practice, and it was not easy, but when I stepped on to the ice, thanks to the support of the crowd, I was able to pull myself together and skate almost without any mistakes."

American Adam Rippon, who was celebrating his 28th birthday today, rose from fourth place to earn the silver medal.

It secured him a second Grand Prix medal of his career.

Olympic champion Yuzuru Hanyu of Japan had dropped out before yesterday’s short programme due to injury.

In the pairs competition, world champions Wenjing Sui and Cong Han of China stormed to the gold medal and set a record free skating score.

It gave them an unrivalled total of 234.53 points.

It secured them their second bronze medal on the Grand Prix circuit this season.

The short dance saw 2010 Olympic champions Tessa Virtue and Scott Moir of Canada dominate with a score of 80.92 points.

The United States’ Madison Hubbell and Zachary Donohue edged out 2014 world champions Anna Cappellini and Luca Lanotte of Italy by less than a point for second place.

Both pairings posted season's bests with Hubbell and Donohue managing 75.87 points and Cappellini and Lanotte amassing 76.31.

The NHK Trophy is the fourth of six events that make up the 2017-2018 ISU Grand Prix of Figure Skating series, which culminates in next month’s Final in Nagoya in Japan.

A total of 60 skaters and couples from 16 ISU members are competing in Osaka.