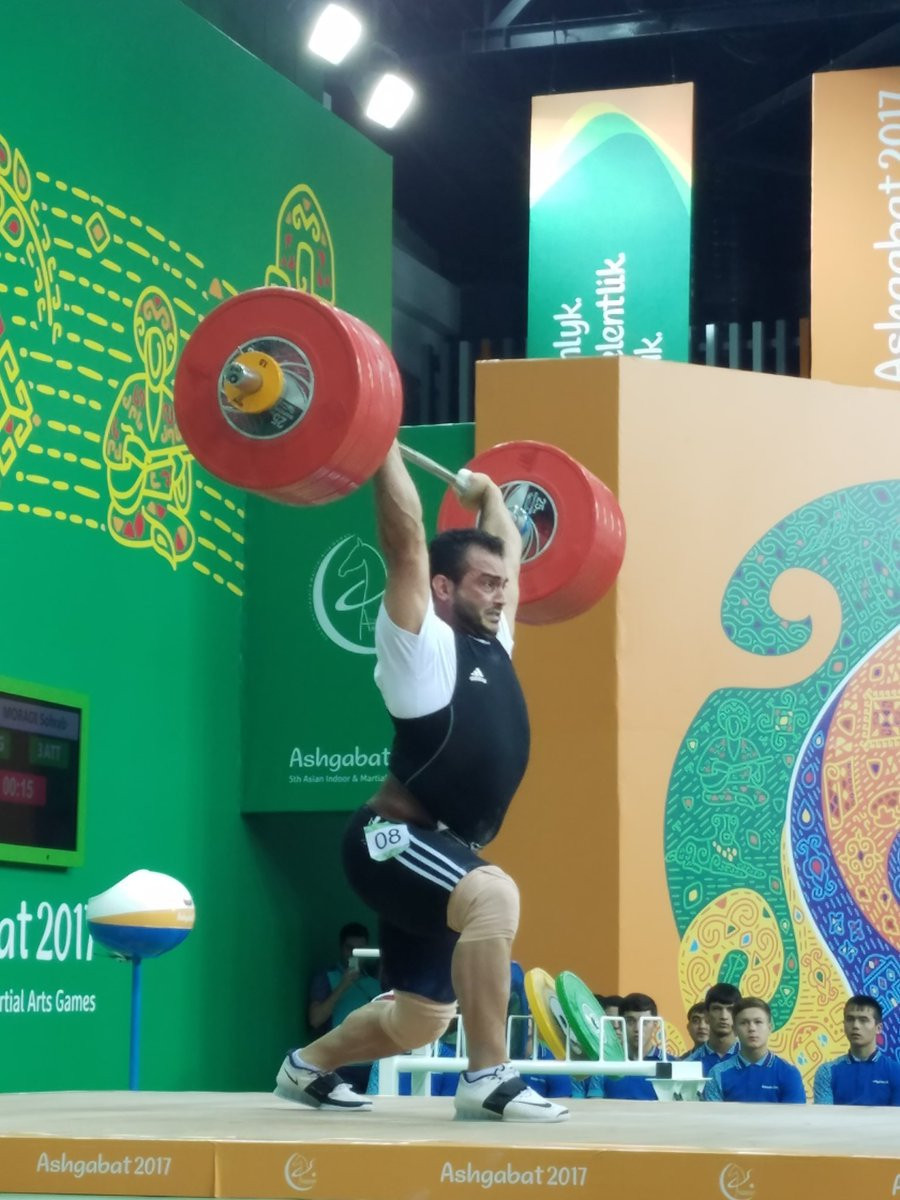 The Iranian, who celebrated his 29th birthday yesterday, registered a total of 413kg to beat the mark set by Greece’s Akakios Kakhiasvilis as far back as November 1999 by 1kg.

It came after he won the snatch with 185kg and the clean and jerk with 228kg.

"This is the result of many years of work and I am very happy and delighted for my efforts," Moradi, who managed a total of 403kg on his way to winning Olympic gold at Rio 2016, said.

"One of my goals as an athlete was to win an Olympic title.

"But this one is also important because I really wanted to do it.

Uzbekistan’s Farkhodbek Sobirov took the silver medal with 391kg, after finishing second in the snatch with 181kg and fourth in the clean and jerk with 210kg.

China’s Lu Hao rounded out the podium with 387kg having finished third in the snatch with 176kg and joint second in the clean and jerk, alongside Qatar’s Fares Elbakh, with 211kg.

In today’s other weightlifting event, Mongolia’s Ankhtsetseg Munkhjantsan claimed the women’s 75kg title with a total of 235kg.

The 19-year-old did not complete her first lift, but she nailed the next five on her way to the gold medal.

She was successful on her second attempt at 100kg in the snatch before her third hoist, at 105kg, gave her a 4kg lead over Japan’s Ayumi Kamiya at the break.

Munkhjantsan’s lift of 130kg with her final attempt in the clean and jerk secured the title.

Kamiya ended up in third place on 224kg combined, while the silver medal went to Uzbekistan’s Omadoy Otakuziyeva with a total of 231kg.

Leung Chun Wing capitalised on a crash by Kazakhstan’s Artyom Zakharov in the penultimate lap of the 100-lap points race to claim the men’s crown.

Zakharov was in the lead after today’s morning session, but after an elimination race he was tied on 112 points with Leung and the United Arab Emirates' Yousif Mohamed Ahmed Mirza Alhammadi.

Alhammadi, the winner of the elimination race, was not able to challenge Zakharov and Leung in the final points race as the pair constantly swapped the lead and took turns in winning intermediate sprints.

Despite the fact that both Leung and Alhammadi had a cooperating team-mate in the race, Zakharov managed to get an advantage over the former by winning more intermediate sprints.

Leung was still close enough to compete for gold in the final sprint and when he made his move, misfortune struck Zakharov, who collided with Turkmenistan’s Yhlas Öwezmyradov and crashed out.

Zakharov had to settle for the runners-up spot behind Leung, while Alhammadi collected the bronze medal.

After a perfect elimination race, in which she kept Thailand’s Jutatip Maneephan and compatriot Li Yin Yin behind, Diao started the points race aggressively by taking an early lap on the bunch together with Thailand’s Phetdarin Somrat and Uzbekistan’s Olga Jantuganova and controlled the rest perfectly.

Li, who went into the points race in the silver medal position, was not able to keep up the pace in the endurance race.

She lost a lap on the bunch and dropped to eighth place in the general classification.

In the men’s keirin final, Kazakhstan’s Pavel Vorzhev went some way towards making up for compatriot Zakharov’s omnium crash by adding a second gold medal to his tally.

Vorzhev, who won the men’s individual sprint yesterday, outclassed the rest of the field.

China were the dominant force in today’s short course swimming competition, winning four of the seven gold medals on offer.

Just as he did in the men’s 100 metres breaststroke, Wang Lizhuo twice broke the Games record in the 50m breaststroke on his way to claiming the gold medal at the Aquatics Centre.

Wang won his heat in 26.71sec to beat the previous mark of 26.98 set by Kazakhstan’s Polyakov Vladislav at the 2009 edition of the event in Vietnam’s capital Hanoi.

He then improved the record further in the final after coming out on top in 26.65.

There were also triumphs for China in the women’s 50m backstroke, which Yang Yifan won in 27.37, and men’s 100m butterfly, thanks to Wang Peng’s unrivalled time of 51.41.

The East Asian nation’s fourth and final gold medal of the day came in the women’s 4x100m freestyle relay in a Games record time of 3:37.94.

There were also Games records set today by South Korea’s Jeong Dongwon in the men’s 50m backstroke and Chinese Taipei in the men’s 4x100m freestyle relay.

The one other gold medallist in short course swimming was Hong Kong’s Chan Kin Lok, who won the women’s 100m butterfly in 58.15.

The one gold medal won today in billiard sports went the way of 17-year-old Nutcharut Wongharuthai, who produced a convincing 4-0 victory over fellow Thai Waratthanun Sukritthanes in the women’s singles six-red snooker final.

Wongharuthai was relentless, finishing with a fierce black into the top left-hand pocket as her compatriot looked on helplessly at the Billiard Sports Arena

The pair train together at the national academy in Bangkok.

Belt wrestling competition also concluded today as hosts Turkmenistan added a further eight gold medals to their tally to finish on 39 from the five days of action.