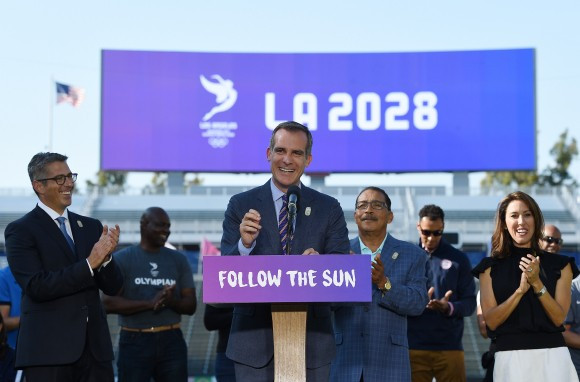 Los Angeles Mayor Eric Garcetti has claimed they are "absolutely not concerned" about hosting the 2028, rather than the 2024, Olympic and Paralympic Games.

The Californian city has already begun a concerted attempt to create the outcome as a "win", even though they had to concede the 2024 Games to its only rival Paris.

The International Olympic Committee (IOC) had confirmed earlier today that they had reached an agreement for Los Angeles to host 2028 and Paris 2024.

Garcetti claimed that the deal was "too good to pass up".

He also claimed that it would allow more time to finish a planned upgrade to the city subway system.

Garcetti maintained that they are "absolutely not" concerned about missed the 2024 Games.

"I am proud to announce that the Olympic Games are coming back to America," the Mayor told a crowd at the StubHub Center at an event attended by the United States women's soccer team.

"In 2028 we are bringing the Games back to Los Angeles.

"A city that has always been a gamechanger, and will be again in 2028.

"There were a couple of times we were counted out of the race altogether, we hit the wall.

The Games are coming back to a city that ❤️s them - not just for their memories of past, but for their promise of a bright future for us all pic.twitter.com/HIi5uWLifb

The IOC have agreed to make a $1.8 billion (£1.4 billion/€1.5 billion) contribution has the potential to exceed $2 billion (£1.5 billion/€1.7 billion) according to the evaluation of the Los Angeles Bid Committee when taking into account the estimated value of existing sponsor agreements to be renewed and potential new marketing deals.

The ceremony focused on the fact Los Angeles had been awarded an Olympic Games rather than dwelling on how they have chosen 2028 rather than 2024.

Wasserman insisted that this is a "big win" for Los Angeles but also for the IOC.

it will be the first time the Summer Olympics have been staged in the US since Atlanta 1996.

During the course of the announcement officials changed the name of the bid's official social media channels, including Facebook and Twitter, to Los Angeles 2028.

Never has an Organizing Committee had 11 years to prepare - meaning 4⃣ more years to create a new Games for a new era in 2028! #FollowTheSun pic.twitter.com/R5ZOF56qEv

Wasserman also singled out the role of US President Donald Trump in supposedly supporting the bid at every step.

A meeting of the Los Angeles City Council is now due take place on Friday (August 4) to assess details of the 2028 bid.

Their approval is then expected next Tuesday (August 8).

It was agreed at last month's Extraordinary IOC Session in Lausanne that a Tripartite Commission would be formed consisting of representatives from the IOC and both prospective host cities.

The recommendation must also be rubber-stamped by the IOC membership at a Session in Lima on September 13.

This is expected to be a formality.