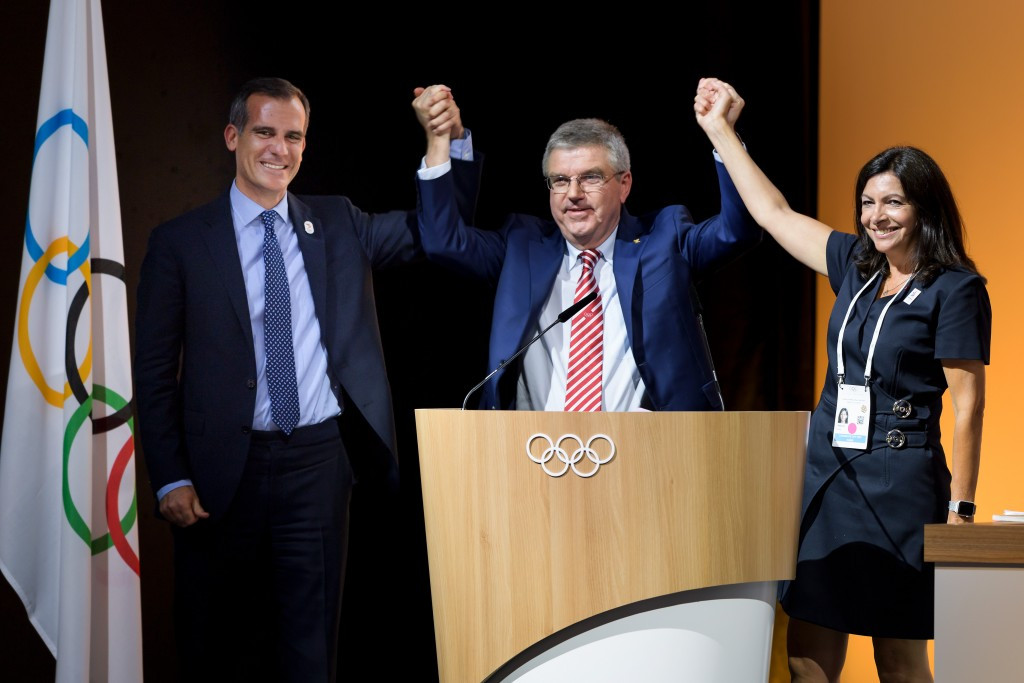 Los Angeles today agreed to host the 2028 Olympic and Paralympic Games, meaning Paris will stage the event in 2024.

Under the terms of the Host City Contract 2028, the International Olympic Committee (IOC) will advance funds to a Los Angeles Organising Committee in view of the longer planning period and increase participation and access to youth sports programmes in the city in the years leading up to the Games.

It follows extensive discussions beginning in April at the SportAccord Convention in Aarhus.

The IOC have confirmed the deal in a statement.

Their contribution will be $1.8 billion (£1.4 billion/€1.5 billion) and has the potential to exceed $2 billion (£1.5 billion/€1.7 billion) according to the evaluation of the Los Angeles Bid Committee when taking into account the estimated value of existing sponsor agreements to be renewed and potential new marketing deals.

United States President Donald Trump has been "personally involved" in helping to make Los Angeles' bid a truly American bid, according to a statement from the Californian city today.

More details of the deal is expected to be announced during a press conference involving Garcetti and Los Angeles 2024 bid chairman Casey Wasserman at 5pm Pacific Daylight Time today.

The announcement that Los Angeles will get access to youth sport funding before the Games is a major coup for the city's Mayor Eric Garcetti.

He announced it as a targeted concession in May in return for settling for the later event.

IOC counterpart Thomas Bach initially claimed this would not happen as they would already receive the "present" of hosting the Games.

According to the Los Angeles Times, the IOC has already agreed to advance a $180 million ($136 million/€152 million) interest-free loan to cover the Organising Committee's operating costs, as well as initial youth sport support.

It will be the first time the Summer Olympics have been staged in the US since Atlanta 1996.

"This is an historic day for Los Angeles, for the United States and for the Olympic and Paralympic Movements around the world," said Garcetti.

"Today, we take a major step toward bringing the Games back to our city for the first time in a generation and begin a new chapter in Los Angeles’ timeless Olympic story.

"This agreement with the IOC will allow us to seed a legacy of hope and opportunity that will lift up every community in Los Angeles– not in 11 years’ time, but starting now and continuing in the years leading up to the Games."

It will mark the third time that both Los Angeles and Paris has hosted sport's showpiece event.

Paris 2024 will have added significance as it will be the centenary of the last time they were staged in the city.

It was agreed at the Extraordinary IOC Session in Lausanne earlier this month that a Tripartite Commission would be formed consisting of representatives from the IOC and both prospective host cities.

Their recommendation will now be rubber-stamped by the membership at another IOC Session in Lima on September 13.

This is expected to be a formality.

"The IOC welcomes this decision of the Los Angeles Olympic and Paralympic Bid Committee," said its President Thomas Bach.

"They presented a strong and enthusiastic candidature that embraces the Olympic Agenda 2020 sustainability priorities by incorporating existing facilities and encouraging the engagement of more youth in the Olympic Movement.

"Therefore, we are very happy that as part of this Host City Contract, we are able to expand the impact of city youth sports programming and encourage the healthy lifestyle of Angelenos for the next 11 years.

"We are very confident that we can reach a tripartite agreement under the leadership of the IOC with LA and Paris in August, creating a win-win-win situation for all three partners.

"This agreement will be put forward to the IOC Session in Lima in September for ratification."

"Paris and Los Angeles are two amazing global cities that are united in their support of the Olympic cause and we stand together now to help the Games thrive in 2024 and 2028," she said.

"As today's announcement shows, dialogue between the IOC and the two cities is progressing well.

"We are confident that a 'win-win-win' agreement can be finalised ahead of the IOC Session in Lima."