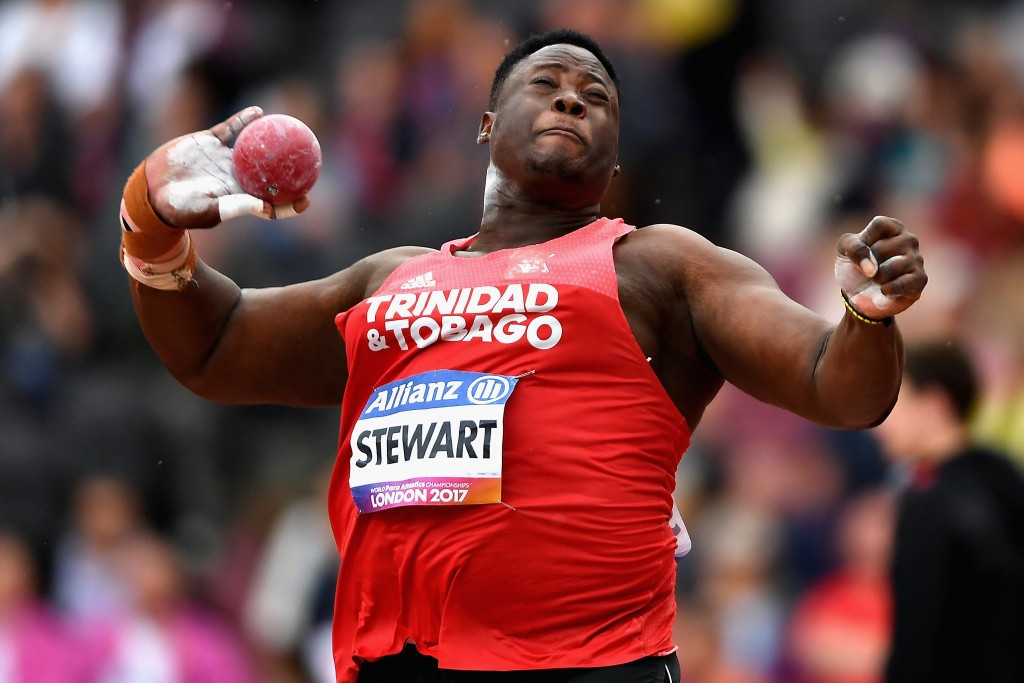 China finished top of the overall medals table after winning a further five today to take their total to 65.

The United States came second with 20 golds, 19 silvers and 20 bronzes.

They were followed by Britain in third with 18 golds, eight silvers and 13 bronzes.

The star tonight, though, was Stewart, who added nearly five metres to the old record.

Winner of the javelin throw F44 title on Tuesday (July 18), he quickly made his presence known in the shot put competition with an opening effort of 18.34 metres.

The distance was considerably further than the previous record of 14.21m set by Germany’s Jorg Frischmann at the 1996 Paralympic Games in Atlanta.

In the fourth round, Stewart improved his world record with a massive 19.08m.

"I finally had an opportunity to do the shot put in a championships, so I’m really happy.

"The javelin is a hobby, but this is what I can do when I train for it.

"I wanted to break the world record to write my name in the record books, but I didn’t think I’d break it by so far.

"I had to settle for fifth in the discus but I’m going to come back and win that too."

Canada’s Brent Lakatos joined the exclusive club of athletes to win four individual titles at these Championships with victory in the men's 100 metres T53.

The 37-year-old joined United States' Tatyana McFadden and Tunisia’s Walid Ktila at the top of the multi-medallists table after getting the better of home favourite and London 2012 champion Mickey Bushell.

"I'm so happy to have got that fourth gold," Lakatos, the winner now of 11 world titles, said.

"It has been an amazing week and better than I expected.

The one other world record to be broken today came in the men’s shot put F32 as Rio 2016 silver medallist Lahouari Bahlaz of Algeria recorded a mark of 11.08m.

It beat that set by Greece’s Athanasios Konstantinidis on his way to Paralympic gold by 69 centimetres.

Oman’s Mohammed Al Mashaykhi was the runner-up with an Asian record of 10.49m and Greece’s Dimitrios Zisidis rounded out the podium with a personal best 9.57m.

In the men’s 5,000m T20, Portugal’s Cristiano Pereira quickly established what proved to be a decisive lead as he crossed the line with a Championship record of 14min 29.80sec.

America's Michael Brannigan, winner of the 800m and 1500m T20 events, attempted to close the gap with eight laps to go but the world record holder had to settle for silver in 14:39.87 with Ukraine’s Pavlo Voluikevych third in 15:01.59.

Ukraine’s Ihor Tsvietov clinched double sprint gold by storming home to win the men’s 100m T35 in a Championship record of 12.38, despite a poor start out of the blocks.

Great Britain’s Jordan Howe was the runner-up in 12.52 and Argentina’s Hernan Barreto came third in 12.78.

Both times were personal bests.

The 25-year-old, winner of this event at London 2012, clocked a Championship record time of 26.02 amid a heavy downpour of rain.

The penultimate track event of the Championships was the women’s 800m T20 and saw Hungary’s Bernadett Biacsi triumph in a Championship record of 2:20.51.

Japan’s Anju Furuya won the silver medal in an Asian record of 2:21.37 and Turkey’s Muhsine Gezer took bronze in a personal best 2:22.94.

American Cheri Madsen was just behind in second with a time of 16.64 followed by compatriot Hannah McFadden in a season’s best 16.68.

A personal best of 50.07m was enough for Iran’s Saman Pakbaz to win the silver medal, while Spain’s Kim Lopez Gonzalez was the bronze medallist with 44.23m.

There was a Championship record as well for Lithuania’s Mindaugas Bilius, who improved on his silver medals from the last two World Championships with gold in the men's shot put F37.

Paralympic champion Manolis Stefanoudakis of Greece has dominated the men's javelin throw F54 for the last two years and he defended his world title with a Championship record of 29.51m,

Iran’s Hamed Amiri posted an Asian record of 27.81m for the silver medal and Belarus’ Aliaksandr Tryputs won the bronze with 27.78m.

Other winners on the track included Britain’s Samantha Kinghorn, winner of the women’s 100m T53 in 16.65.

Australia’s James Turner won his third title at the Championships with success in the men’s 800m T36 in 2:08.78.

China won the men’s 4x100m relay T11-T13 in 48.56 after original winners Spain were disqualified for running out of the change zone and the two other competing teams, Brazil and the US, failed to finish.

There was also controversy in the men’s 4x100m relay T42-47 with the US crossing the line first only to be disqualified later in the evening.

It was due to second runner Jarryd Wallace going out of lane while handing over the baton to third runner Tanner Wright.

Among the other winners in the field were the US's Taleah Williams in the women’s long jump T47 with 5.27m and Algeria’s Nassima Saifi in the women’s shot put F57 with 10.59m.

Results went to form in the men’s discus throw F46 as defending champion Hou Zhanbiao came out on top with 48.42m.

Paralympic champion Mauricio Valencia of Colombia added a world title to his collection thanks to a season’s best throw of 35.21m in the men's javelin F34.

Italy’s Martina Caironi was the strongest performer in the women’s long jump T42 with a personal best of 4.72m.