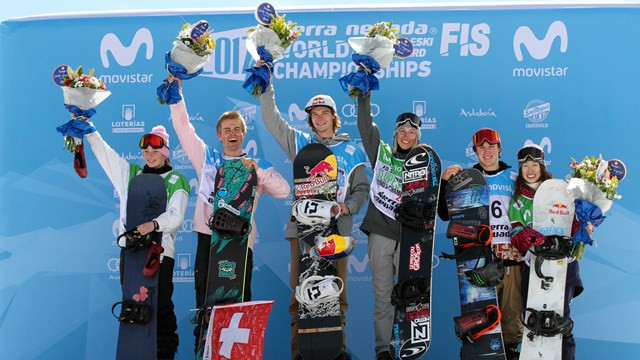 The 25-year-old Smits posted a winning score of 91.40 points, beating nearest challenger Nicolas Huber of Switzerland by 8.15 and the United States’ Chris Corning by a further 0.75.

Victory was secured thanks to a superb second run and ensured him a second World Championship crown having also triumphed in Spain in 2011, when the event was held in La Molina.

"I was trying to put a clean run together.

"It probably wasn't the hardest run we have seen today but I managed to bring it down pretty clean after I was struggling a bit in my first run on the first rail."

Twenty-year-old Blouin also produced an impressive second run to triumph in the women's event with a score of 78 points, just 0.5 more than New Zealand’s Zoi Sadowski Synnott in second place.

Defending champion Miyabi Onitsuka of Japan had to settle for bronze on this occasion with 77.4 points.

"I didn't expect it," Blouin said.

"You don't want to be too sure of yourself, but I worked so hard and that just proved to me that the work that I did was worth it."

The men's and women's snowboard halfpipe competitions were also held today as Australia's Scotty James and China's Cai Xuetong defended the respective titles they won in Austrian resort Kreischberg in 2015.

Rounding out the podium was Podladtchikov's compatriot Patrick Burgener, who finished seven points off the pace.

In the women's event, Cai registered 90.75 points to win by a margin of six over Japan's Haruna Matsumoto.

Action in Sierra Nevada is due to continue tomorrow with the men's and women's snowboard cross events.