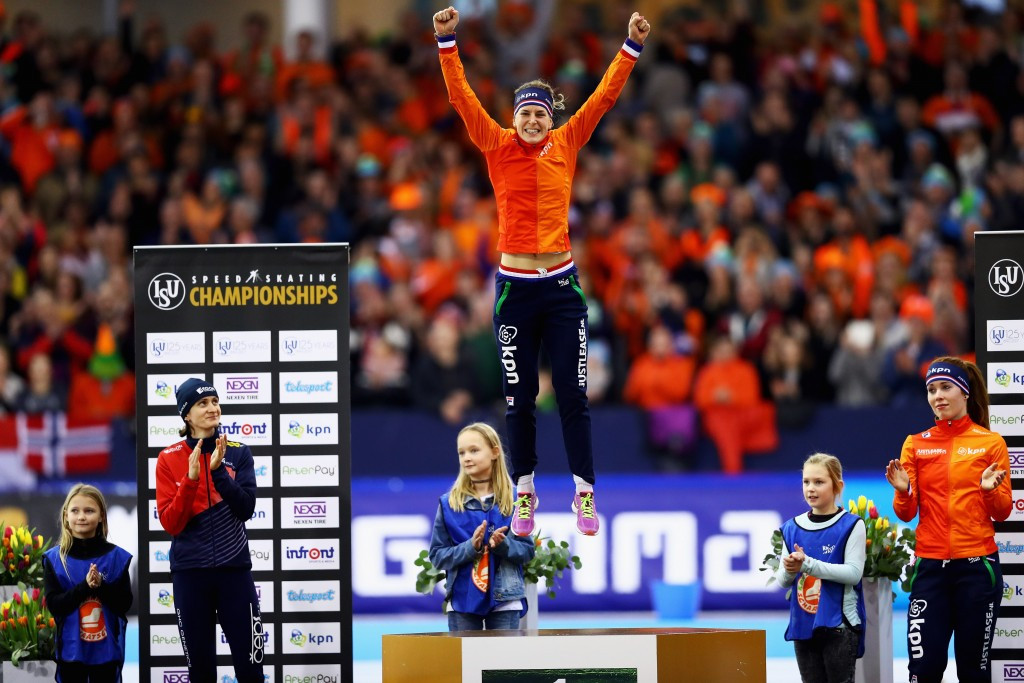 Ireen Wüst and Kai Verbij of The Netherlands claimed the overall women's allround and men's sprint titles on the second day of action at the International Skating Union (ISU) European Speed Skating Championships.

Wüst won her 500 metres and 3,000m events to establish a lead in the women’s allround classification yesterday and built on that to secure the gold medal today, claiming two more podium finishes.

Her compatriot, Antoinette de Jong, finished in second on 1:58.34 while the Czech Republic's Martina Sáblíková completed the podium in a time of 1:58.72.

Wüst could have wrapped up a comfortable allround win in the final race of the tournament, the 5,000m, but finished almost seven seconds behind Sáblíková, who won in a time of 6:57.47.

However, second proved enough for Wüst, the four-time Olympic gold medallist, who's time of 7:03.54 was enough to secure the overall win in the allround.

Yvonne Nauta of The Netherlands finished third in the 5,000m event 7:05.41 which was good enough to secure fourth overall.

Following the conclusion of all four races, Wüst finished top of the standings with a total of 161.125 points.

Sáblíková secured the silver medal on 162.288 while de Jong completed the podium after amassing 162.645.

Further Dutch success followed as Verbij secured first place in the men's sprint competition, despite failing to win a race at the Thialf Arena.

Ronald Mulder of The Netherlands won the men's 500m race today in a time of 35.08 seconds.

Verbij followed closely behind in second in a time of 35.12 while Russia's Alexey Yesin took third in 35.20

In the final race of the tournament, the 1,000m, Dutch skater Kjeld Nuis, who won the 500m event yesterday, took gold.

Verbij once again made it onto the podium coming third in a time of 1:09.25.

His failure to win a race proved no barrier to Verbij, though, as he claimed the overall title with an overall points score of 139.230.

Norway's Sindre Henriksen won the opening race of the men's allround competition in the 500m.

In the women's sprint competition, Russia's Olga Fatkulina took first place in the 500m event in a time of 38.16.

There was further Dutch success though as Jorien ter Mors won the 1,000m race.

The men’s allround and women’s sprint tournaments are scheduled to bring the tournament to a close tomorrow.