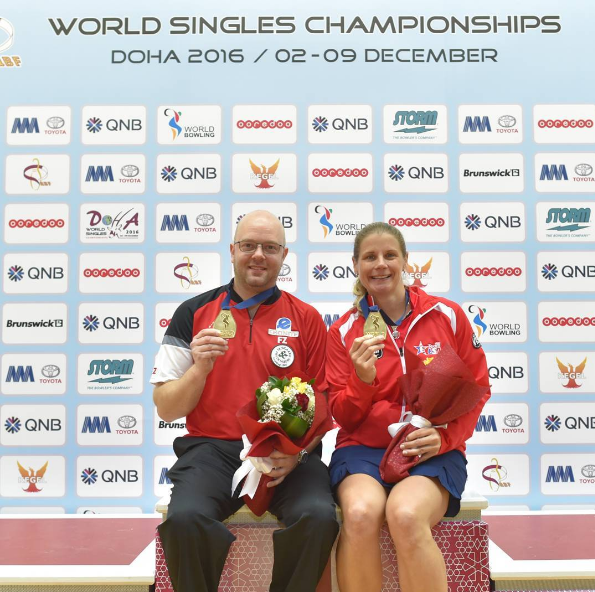 The 39-year-old scored 214 in the match at the Qatar Bowling Centre in Doha, bettering New by 19 points.

In the men’s side of the competition, Danish bowler Jesper Agerbo beat Malaysia’s Rafiq Ismail 256-205 to claim the Championship title.

Kulick claimed victory four years ago in Limassol, Cyprus, and despite having what she admitted before the tournament as a “dry-spell” in terms of winning titles, the American set her sights on retaining the crown.

In the final, she opened up with three consecutive strikes to build a lead.

New stayed in contention throughout the battle, but failing to get a strike in the eighth end saw the crown handed to Kulick once again.

“I honestly feel relieved,” Kulick said after her victory.

“It has been a long time since I’ve been in the winner’s circle, but I wanted to defend my title here and I achieved that goal.

“It’s been a wonderful weekend in Qatar.”

Both semi-finals in the women’s draw were United States versus Singapore showdowns, with New beating Shannon Pluhowsky in the first match.

However, Kulick made saw it was not an all-South East Asian final as she held off the challenge of Shayna Ng.

Agerbo put in a dominant performance in the men’s singles final as six strikes in a row saw him cruise to victory.

Earlier in the day, Agerbo overcame Finland’s Joonas Jahi by 66 points to make the final, while Ismail defeated Michael Mak of Hong Kong 235-224 in the other semi-final.

The next Championships are due to take place in Tokyo, Japan, in 2020.

World Bowling had applied to get the sport included at the Olympic Games in the same country and year, but their bid was rejected.