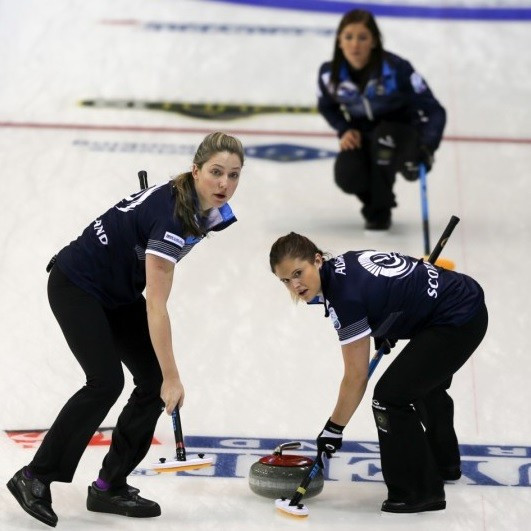 Hosts Scotland maintained their 100 per cent record with two victories as defending women’s champions Russia fell to their first defeat at the European Curling Championships in Braehead today.

The Scottish rink, skipped by Sochi 2014 Olympic bronze medallist Eve Muirhead, emerged with a 6-5 victory from a tight encounter with Sweden in the morning session.

They then went on to enjoy a comfortable 10-5 triumph over Norway to end day two of the competition as the only team with three consecutive wins.

“My team were fantastic and that makes my job easier when you have your team playing so well,” Muirhead said after surviving a scare against the Swedes.

“Yes, I made it difficult for myself in the last end there but you know you’ve got to come out with those ‘clinking’ shots to win, and we managed that.

“The crowd have been fantastic and even for an eight o’clock in the morning draw to see so many people supporting us is great.”

Russia, who are fielding a different team to the won which won the European title in Esbjerg in Denmark last year, have not quite hit top form and Sweden were able to capitalise, recording a convincing 11-4 success.

It came after Russia overcame Denmark 3-1 in the morning session.

The Czech Republic, Germany and the Danes joined Russia on a two win and one loss record.

The Czech team recovered from an 8-4 defeat at the hands of Finland by thrashing Italy 10-3, while Denmark surprised world champions Switzerland 7-6.

Germany were arguably the day’s star performers as they earned two victories, overcoming Italy 8-7 before claiming an 8-5 triumph against Finland.

In the men’s competition, Switzerland picked up their third straight win by hammering a hapless Finland rink 10-2.

Five nations sit on two wins and one defeat, including hosts Scotland, who gave the home crowd further success to cheer when they were on the right side of an 8-4 scoreline against Sweden, skipped by Olympic bronze medallist Niklas Edin.