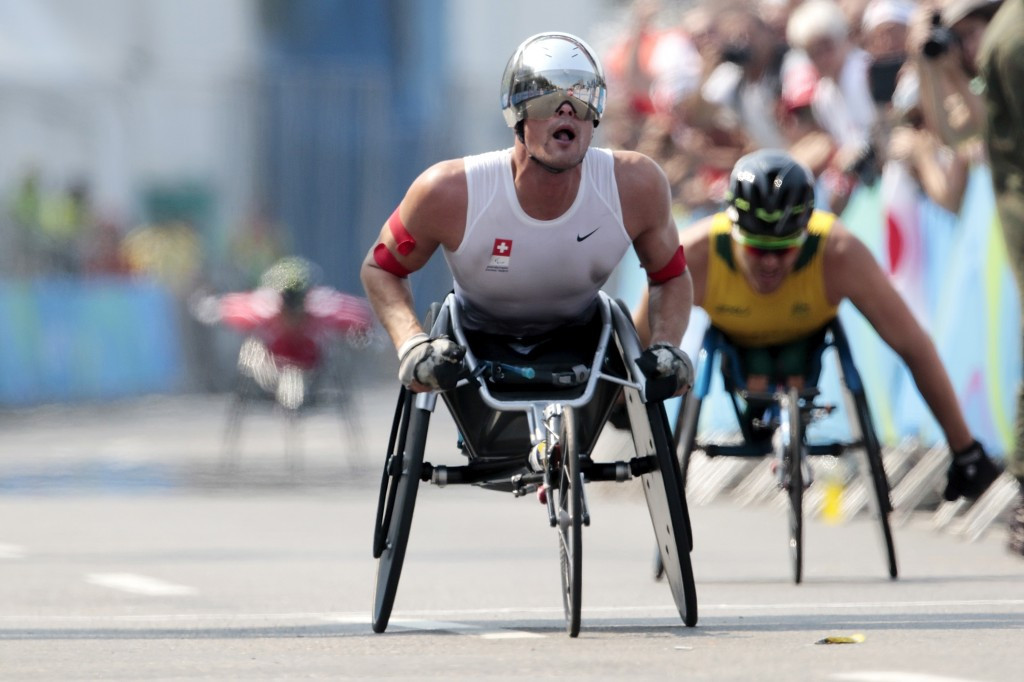 Switzerland’s Marcel Hug arrived in Rio de Janeiro without a Paralympic Games gold medal to his name but he ensured he left the Brazilian city with two after he clinched victory in the men’s marathon T54 to add to his 800 metres success on the track.

Hug, whose nickname of the "silver bullet" may have to be revised due to his triumphs at Rio 2016, edged Australian Kurt Fearnley with a time of 1 hour 26min 16sec in a thrilling sprint finish along Copacabana on the final day of sporting action at the Paralympics.

In the women’s marathon T54, Zou Lihong of China denied the formidable Tatyana McFadden a fifth gold medal by edging out the American in a photo finish, clocking 1:38:44.

China had already enjoyed success in the marathon events thanks to Li Chaoyan reigning supreme in the men’s T46 classification as he beat Abderrahman Ait Khamouch of Spain by crossing the line in 2:33:35, with Manuel Mendes securing a rare medal for Portugal with the bronze medal.

The T12 men’s race was won by El Amin Chentouf of Morocco in 2:32:17 ahead of Alberto Suarez Laso of Spain and Japan’s Masahiro Okamura respectively.

Spain's Elena Congost sealed the women’s T12 honours in a time of 3:01:43, finishing more than five minutes ahead of Japan's Misato Michishita.

The men’s T54 had been billed as the latest episode in a long-running rivalry between Hug and defending champion David Weir.

But the Briton's Rio 2016 campaign, plagued with disappointment after he failed to win a medal on the track, came to a disappointing and unfortunate conclusion as he collided with another rider early on, forcing him to withdraw.

Hug and Fearnley broke away early from the pack and it paid dividends as none of the chasing athletes were able to keep pace with the duo.

"It was difficult but we both knew we were having a sprint and luckily I had a better run in the end, a better sprint," Hug said.

"We heard that the gap with the second group was growing more and more, and so we just worked together to come to the sprint together and then the faster would win.

"It's difficult to say which of the four was my favourite, but to win the 800m was a relief. And now to win this gold medal in the marathon is also awesome, very great."

The women’s equivalent also proved to be a dramatic affair, with McFadden - one of the stars of the Paralympics - bidding for a fifth crown.

The Russian-born American, winner of the 400m, 800m, 1500m and 5,000m, looked well-placed throughout the event but lost out to Zou in a thrilling finale, which also involved McFadden’s team-mate Amanda McGrory, who won the bronze medal.

Zou’s success also proved to be the last victory of Rio 2016 tor this dominant Chinese team, who ended with a total of 106 gold medals to comfortably top the overall Rio 2016 standings.