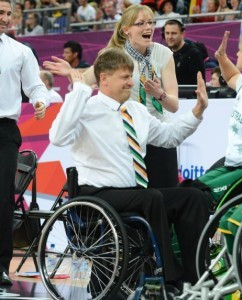 Six-time Paralympian David Gould has been appointed as the new head coach of the Australian women’s wheelchair basketball team.

The announcement was made by the Australian Paralympic Committee and Gould will take charge with immediate effect, replacing Tom Kyle.

Gould, who also participated in five World Championships during his career on the court, helped guide the Australian outfit to Paralympic bronze at London 2012 in his role as an assistant coach.

He was also in charge of the junior national women’s team which returned from last year’s World Championships in Beijing.

The Adelaide-born Paralympian says he can’t wait to get started.

“I am thrilled and honoured to be named as head coach of the Gliders programme,” said Gould.

“This is a programme with a great history that has achieved many triumphs and I am looking forward to the challenge of taking these incredible athletes on a journey back to World Championship success.

“We will work hard as one unit to build up our programme, and continue to improve the depth of the programme and develop the next generation of players.”

Gould’s coaches and other support staff for the team have also been assembled.

Stephen Charlton and Ben Osborne have joined the management staff as assistant coaches, while physiologist Jo Miller, physiotherapist Anna de Araugo and strength and conditioning co-ordinator Rebecca Ryan have all signed on to work under Gould’s regime.

Gould will be tasked with ensuring Australia banish the demons of their failed Rio 2016 qualification campaign as they were unable to reach the Games in the Brazilian city.

Australia’s women have won three Paralympic silvers - at Sydney 2000, Athens 2004 and in London - while they also clinched bronze in Beijing.