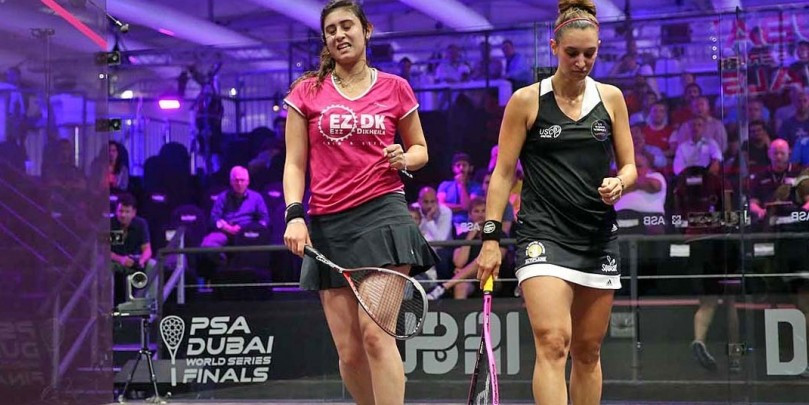 Women’s world champion Nour El Sherbini squeezed through to the last four of the Professional Squash Association (PSA) Dubai World Series Finals with victory over France’s Camille Serme as the group stage of the tournament came to a close.

In front of the iconic Burj Khalifa, the Egyptian, who had suffered defeat to compatriot and world number three Raneem El Welily earlier in the tournament, took just 20 minutes to sweep past Serme with an 11-4, 11-6 win in Group B.

El Welily completed the first phase of the season-ending competition with a 100 per cent record as she beat Omneya Abdel Kawy, also of Egypt, 15-13, 11-9.

“It is a big relief to qualify because I really needed to win this match today,” said El Sherbini.

“After the whole season to come here and lose was something I definitely did not want to do – I knew I had to be really focused and give it everything and I’m happy that I played well.”

The Egyptian duo will be joined in the semi-finals by world number one Laura Massaro of England as she overcame American Amanda Sobhy with a hard-fought 13-11, 11-9 success.

Malaysian Nicol David maintained her pursuit of a third PSA World Series Finals crown, confirming her berth in the last four by clinching a 11-7, 11-9 triumph against world junior champion and team-mate Nouran Gohar.

Massaro will take on El Sherbini in the semi-final, where she will have a shot at avenging her defeat to the Egyptian in the final of the World Championship, while David will face El Welily.

In the men’s competition, Cameron Pilley became the first Australian since David Palmer in 2008 to reach the semi-finals as he proved too strong for sixth seed Simon Rösner of Germany 11-2, 11-7.

His opponent in the next round will be world number one Mohamed Elshorbagy, whose group stage campaign ended in defeat as he lost 12-10, 12-10 to Nick Matthew, handing the Englishman his first win of the tournament.

Gregory Gaultier of France is also through as he fought back from a game down to clinch a superb 7-11, 11-8, 11-1 win in his clash with Omar Mosaad, the fourth seed from Egypt.

“I didn’t have the same preparation today before my match- I didn’t come to practice this morning, I just preferred to rest,” said Gaultier.

“It was in my head a bit at the beginning, trying to figure out if I should relax or try and stay in my rhythm.

"He surprised me at the start as he was striking the ball well and covering the court much better than his first two matches.”

Miguel Angel Rodriguez of Colombia awaits in the semi-finals as his opponent, Mathieu Castagnet, was forced to withdraw from their match when he was trailing 11-9, 6-4.