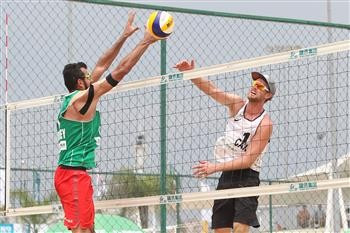 Canada's Chaim Schalk and Ben Saxton roared into the knock-out stage at the International Volleyball Federation (FIVB) Beach Volleyball World Tour Fuzhou Open by winning all of their group games.

The pair  began by beating Germans Armin Dollinger and Lorenz Schümann 21-19, 21-13 yesterday and they were in good form again today as they topped Group B without dropping a set.

They saw off Turkey's Murat Giginoglu and Volkan Gogtepe 21-13, 21-15 and also got the better of Venezuelans Jesus Villafañe and Jackson Henriquez 21-12, 21-17.

The match with the Turkish pair became heated at times, with their rivals voicing opposition after some decisions at the Chinese venue.

"There was a little bit of talk, in any sport it gets a little aggressive sometimes, tight calls and all that stuff but we managed it well so we were able to come out on top of the little dispute,” said Saxton.

Schalk added: "We played well so we’re happy about that and want to keep doing that tomorrow as well.

“Anytime you can win your pool and not drop a set, I think it’s good for anyone.

"It was a good pool play for us and we want to go deep into this tournament so it’s a good start."

In the women's competition, Italy's Marta Menegatti and Viktoria Orsi Toth  got off to a good start with two victories as the group stage began.

They beat Japanese qualifiers Ishii Miki and Murakami Megumi 21-15, 21-14 and were then too good for Stefanie Schwaiger and Barbara Hansel of Austria 21-17, 22-20.

Their second success was over Italy's Rebecca Diane Perry and Laura Giombini 21-14, 26-24.

The action is due to continue tomorrow with the final women's group matches and the start of the men's knock-out stage.