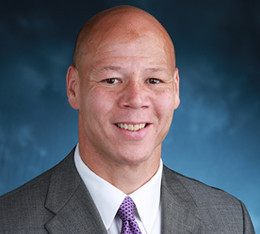 Chris Thompson, senior vice-president of Government relations for the 2028 Olympic and Paralympic Games in Los Angeles, has been appointed by the city's Mayor-elect Karen Bass as her chief of staff, it has been announced.

The 69-year-old Democrat, the first woman and second black Angeleno to be elected Mayor of the United States' second-biggest city, will succeed Eric Garcetti, who had completed the maximum two terms.

Thompson, who had worked for Los Angeles 2028 since October 2020, is due to start his new role on Monday (December 5), a week before Bass is officially scheduled to take charge and will oversee her transition.

"My number one priority is assembling a team that will be ready on day one to move our city forward," Bass said.

"With his vast leadership experience and shared vision for our city, Chris is the right person to serve as my chief of staff and work with me to lead our agenda for Los Angeles' future.

"Though this is an unprecedented three-week transition, make no mistake - change is coming and we will hit the ground running."

He also serves on the Boards of Directors of the PBS SoCal/Public Media Group of Southern California and the California Science Center Foundation and previously served on the Board of the Los Angeles Area Chamber of Commerce.

As part of his role at Los Angeles 2028, Thompson has been registered as a City Hall lobbyist since November 2021.

The appointment of Thompson is expected to be opposed by activist groups opposed to Los Angeles hosting the Olympics for the third time after 1932 and 1984.

Bass was declared the winner in the election against Rick Caruso, a former Republican who switched sides to the Democrats, on November 16 and had amassed an insurmountable lead of nearly 47,000 votes with 70 per cent of the vote counted.

The results are due to certified next Monday.

Bass has invited the entire outgoing staff of Garcetti, who oversaw Los Angeles' successful bid to host the 2028 Olympic and Paralympic Games, to remain in their roles until April to help with the transition period but plans to appoint her own people to the most key roles.

Bass had previously pledged to declare a state of emergency to address the city's out-of-control homelessness crisis on her first day in the job.

Among the election promises that Bass made during her campaign was to eradicate homelessness in Los Angeles, a sprawling city of more than four million people, by the time it stages the 2028 Olympic and Paralympic Games.

Los Angeles has experienced a four per cent increase in its homeless population during the COVID-19 pandemic, with 69,144 unhoused people counted across the county this year, according to Government data published in September.

"The people of this city spoke loud and clear when they delivered a decisive victory for Mayor-elect Bass," Thompson said.

"She has laid out a clear vision and plan to confront the crisis of homelessness and to make our city safer and more affordable for all."