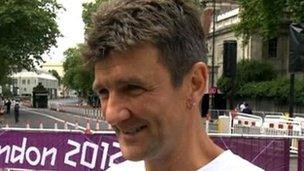 The skydiver who parachuted dressed as Queen Elizabeth II at the Opening Ceremony of the 2012 Olympic Games in London has been convicted of causing grievous bodily harm (GBH) without intent after throwing his partner down a flight of stairs.

The court heard that the attack on his partner Tanya Brass took place on October 24 2020.

Connery, who became known as the "Birdman of Henley," trained in secret for his role at the 2012 Opening Ceremony where The Queen and James Bond actor Daniel Craig boarded a helicopter which flew from Buckingham Palace to the Olympic Stadium.

Connery was one of two skydivers for the leap from almost 250 metres above the stadium.

The jump was synchronised with the arrival of the Royal party, with Connery wearing a dress that was identical to that worn by the Queen.

Mark Sutton, who made the jump in a dinner jacket as James Bond alongside Connery, was killed in a skydiving accident in 2013.

"This is a nasty allegation of domestic violence," prosecutor Jonathan Stone told the jury.

"The vast, vast majority of those types of cases go on behind closed doors, behind curtains, away from prying eyes."

The Court heard that Connery had told paramedics attending the scene that Ms Brass had tripped whilst trying to strike him before falling.

The medics confirmed that the victim had told them she had been pushed.

She also said that Connery had taken the telephone from her when she tried to summon help.

Friends of Connery had described him as "calm and considerate".

"You have heard a number of character witnesses speak of Mr Connery in glowing terms," the prosecutor added.

"I have no doubt he is a lovely chap, at work, down the pub, on the golf course.

“But none of the character referees have said that they peered through the window while the defendant and Ms Brass are home alone, when he holds all the cards."

The court heard how Brass had been on medication for bipolar personality disorder at the time of the incident.

Sentence has not yet been passed, but it could include a term of imprisonment.

A jury cleared Connery of a further charge of causing GBH with intent.