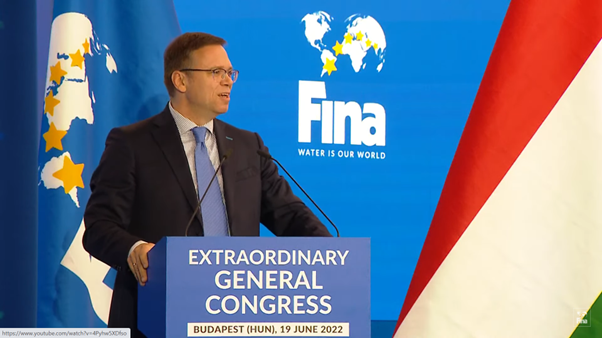 International Swimming Federation (FINA) Bureau member Balázs Fürjes has declared the World Championships in Budapest a "huge success", highlighting the short timeframe for preparations and the achievements of athletes.

The Hungarian capital staged the FINA World Championships for the second time following the 2017 edition, but was only awarded hosting rights in February.

FINA opted to create an additional World Championships when Fukuoka in Japan was forced to postpone its staging of the event until 2023.

This was the first time the event had been held since the 2019 edition in Gwangju, and Fürjes believes that the return of FINA's flagship event was a notable achievement.

"I definitely think that it was a huge success," Fürjes, who is also deputy Minister in the Office of Hungary's Prime Minister Viktor Orbán, told insidethegames.

"For two years we had COVID, international sport life has been paralysed, we have been separated and isolated, and many Championships, including the FINA Worlds, had to be delayed and cancelled.

"But together the international community and Hungary overcome the difficulties, and finally we could have a World Championships under regular and normal rules, so back to normal.

"The athletes could compete, athletes first.

"We wanted to stage the World Championships, and the leading thought was not to have another year passing without the best being able to perform and show their abilities, and also for the fans - we wanted to get together with each other and touch base with our heroes and icons, so again to have a normal Championships."

Fürjes drew attention to the limited period in which organisers had to prepare for the Championships, but insisted that the performances from athletes offered proof of the success of the event.

"It was under extraordinary circumstances just leaving behind COVID and with 100 days to prepare, and yet it was a big success.

"The venues were crowded and athletes had every chance to perform at their best.

"We are very happy that one from the seniors was by [Hungarian swimmer] Kristóf Milák, who broke his own world record in the men's 200m butterfly, but also the eight junior world records are very promising for the future.

"I think a good part of the Paris 2024 winning team was here and performing in Budapest, not only from Hungary but from Romania, from France, and you could continue the list."

He also argued that the host nation's success and the profile of the World Championships will provide a tangible legacy to Hungary.

"I think the Championships was very successful - we could serve the athletes, we could serve the fans, altogether for Budapest it meant more than 60,000 guest nights in hotels for a tourism which is getting back on track after COVID, and for the Hungarian team it was a success with gold medals in the swimming pool, medals in open water and the silver medal in women's water polo.

"It also helped us to re-establish Budapest as a global sports capital, so I think in all these areas it was a big achievement.

"But what I want to emphasise is that it was teamwork, so of course it was staged in Budapest and Hungary, but we really appreciate the trust that FINA put into Budapest because in the beginning they had to take a risk - will Budapest be able to do it in just 100 days?

"They had to take a deep breath and be brave and risk, but I think we served their trust and the prime Championships was staged.

"It energised Budapest and Hungary for sure.

"I expect that just like we experienced after the 2017 FINA Worlds, more kids will show up in September in the pools to do swimming and water polo mostly, so it's definitely created a positive vibe internationally and locally as well."

The FINA Bureau member claimed that the strength of the relationship between the International Federation and Hungary provided confidence that the Championships could be organised in such a short space of time.

"I can even say it is an eternal friendship with FINA.

"It has a long history.

"The first ever swimming gold medal back in Athens 1896 was gained by a Hungarian named Alfréd Hajós, who also was the first Olympic champion for Hungary, so we have a deep root, a deep connection with FINA.

"But we also have more current history, staging the 2017 Worlds, also preparing for the 2027 edition, many World Cups and other events, so we know each other.

"It's a trusted partnership built on experience and good experience, so we both knew that we can do it.

"Of course we knew that we would have to work very hard day and night with no sleep for 100 days, but we were sure that we could do it, we just knew that it would take a lot of energy and hard work.

"But hard work pays off, and I emphasise the teamwork, so it was not Budapest alone, it was the teamwork of the aquatic family."