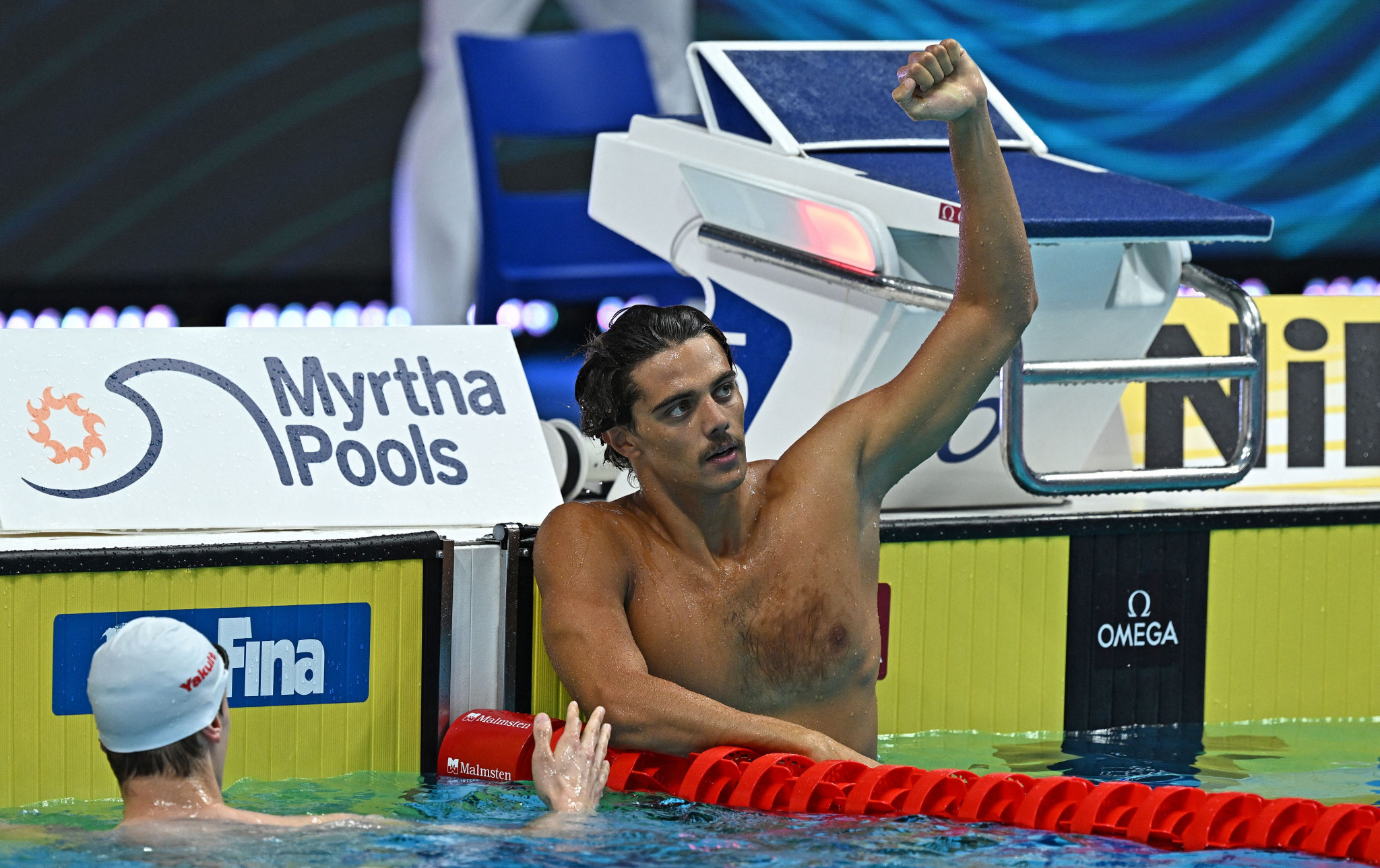 It was a stunning performance from the 21-year-old, whose only previous medals at the Olympic Games and World Championships had been in relay events.

Ceccon triumphed in 51.60sec, beating the previous record of 51.85 set by American Ryan Murphy at the Rio 2016 Olympics.

"I didn't think of any record or time before the start," Ceccon admitted.

"The water and the pool are excellent and it's a fantastic thing when you break the world record in every sport - for me it's simply unbelievable."

Murphy was second in Budapest, finishing 0.37 behind Ceccon.

Fellow American Hunter Armstrong was a close third in 51.98.

Greece's Apostolos Christou had set a Championships record of 52.09 in the semi-final, but his 52.57 effort was only enough for fifth overall.

There was also a phenomenal performance in the first race on the third day of swimming competition in Budapest, with Romania's David Popovici breaking the world junior record that he set in the semi-finals to claim men's 200m freestyle gold.

The 17-year-old beat his record by more than one second, clocking 1min 43.21sec to leave his rivals trailing in his wake.

Hwang Sun-woo of South Korea took silver in 1:44.47, while Olympic champion Tom Dean of Britain had to settle for bronze in 1:44.98.

Popovici's dominant performance also made him the first Romanian male swimmer to take gold at the World Championships.

While that was his first gold medal on this stage, Katie Ledecky claimed her 17th, leading an American one-two in the women's 1,500m freestyle.

The seven-time Olympic gold medallist was dominant from the start, and although Championships and world records slipped away, she finished more than 14 seconds clear of compatriot Katie Grimes with her time of 15:30.15.

Regan Smith gave the medals table-topping United States a second gold of the day, triumphing in the women's 100m backstroke final in 58.22.

Kylie Masse of Canada took silver in 58.40, with American Claire Curzan third in 58.67.

In the final race of the day, Benedetta Pilato made it a double success for Italy in the women's 100m breaststroke.

In a closely contested race, battles for gold and bronze were both settled by a margin of just 0.05.

London 2012 Olympic champion Lithuania's Rūta Meilutytė finished on the podium at the World Championships for the first time since 2015 in 1:06.02, staving off the defending champion and Tokyo 2020 bronze medallist Lilly King of the United States.

Earlier in the day, Ukraine claimed its first gold medal of the Championships in the women's team free combined artistic swimming competition at the Széchy Outdoor Pool in Budapest.

Maryna Aleksiiva, a member of Ukraine's Olympic bronze medal-winning team at Tokyo 2020, declared afterwards: "We want to show the world how brave the Ukrainian people are, and we are so happy to be here and just doing that."

The other artistic swimming gold of the day went to Italy's Giorgio Minisini and Lucrezia Ruggiero in the mixed duet technical routine event.

Their 89.2685 earned them a dominant win, with closest challengers Tomoka Sato and Yotaro Sato of Japan scoring 86.5939.

China's Shi Haoyu and Zhang Yiyao rounded off the podium with 86.4425.

Russia dominated artistic swimming at the last World Championships in Gwangju three years ago, but have been banned by FINA from this year's edition in Budapest due to the invasion of Ukraine.

Further finals are due to be held tomorrow on the fourth day in the Hungarian capital.

They include the women's team technical routine event in artistic swimming, with four individual swimming finals as well as the mixed 4x100m medley relay scheduled at the Duna Arena.