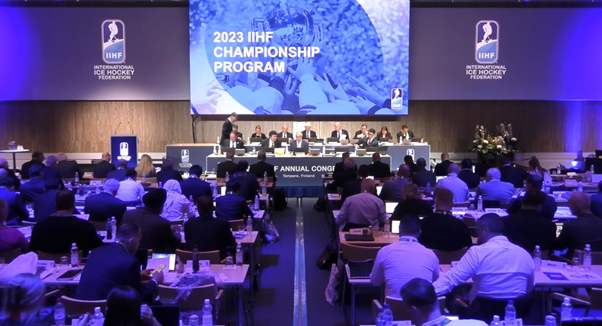 Finland and Latvia have been confirmed as hosts for the 2023 International Ice Hockey Federation (IIHF) Ice Hockey World Championship in place of Saint Petersburg at the Annual Congress, where President Luc Tardif reiterated that measures taken against Russia and Belarus were for "safety" reasons.

The second day of the IIHF Annual Congress was held at the Tampere Hall Convention Centre in the Finnish city alongside this year's men's World Championship.

Tampere is set to serve as the main venue for next year's Championship, with its Nokia Arena staging the semi-finals and medal matches.

The Arena Riga in Latvia's capital is the other rink set to be used for the 2023 edition.

Finland and Latvia's approval as host nations for next year's World Championship was a formality, after a bid from Hungary and Slovenia was withdrawn due to a lack of support from the Hungarian Government.

Further details on the withdrawal were provided to the Congress yesterday, with a request from Hungary and Slovenia to reverse their decision rejected as the deadline for applications had already passed.

Next year's World Championship is scheduled for May 12 to 28.

His Latvian Ice Hockey Federation counterpart Aigars Kalvitis added: "We are happy for your trust and are ready to host the World Championship with the best conditions for the teams and the best atmosphere for the fans."

Finland is hosting the ongoing IIHF World Championship in Tampere and Helsinki, while Latvia held last year's competition, albeit with COVID-19 restrictions on fan attendance.

An IIHF bylaw prevents countries from hosting a World Championship in the same category in consecutive years unless there are no other applicants.

Tardif revealed yesterday at the Congress that "informal" discussions were held with Czech Republic and Switzerland over hosting the 2023 Championship, but that Finland and Latvia proved best placed.

Saint Petersburg had initially been awarded the 2023 World Championship in 2019 under Tardif's long-serving predecessor René Fasel, an International Olympic Committee (IOC) honorary member who is under investigation by the IIHF Ethics Board over reportedly taking up a lucrative consultancy role with the Russian-funded Kontinental Hockey League, as well as public statements about the invasion of Ukraine.

The Russian city was stripped of hosting rights last month by the IIHF Council.

Russian and Belarusian athletes and officials have also been banned from IIHF competitions due to the invasion of Ukraine, in line with recommendations from the IOC.

Prior to his Presidential report at the Congress, Tardif addressed criticism from Russia over the measures taken by the IIHF.

"The decisions were guided by this purpose.

"We are on the same line as the recommendations of the IOC and other big federations like FIFA and UEFA."

However, the French official declared that the IIHF hoped Russia and Belarus would be able to return to its competitions "as soon as possible".

Tardif was elected as IIHF President at the Semi-Annual Congress in Saint Petersburg last September for a five-year term until 2026.

He reflected on his tenure so far in the report, declaring that despite its challenges, "I love the job".

Tardif expressed his delight at the return of World Championship across the various categories, arguing: "We can say we are back on ice."

Prague and Ostrava in Czech Republic had already been awarded the 2024 edition, with the 2025 Championship set to be held in the Swedish capital Stockholm and Herning in Denmark.

The 2023 IIHF Ice Hockey Women's World Championship was allocated to Canada, with the United States hosting the tournament the following year.

Herning and Frederikshavn in Denmark are due to host the Women's World Championship from August 25 to September 4 this year.