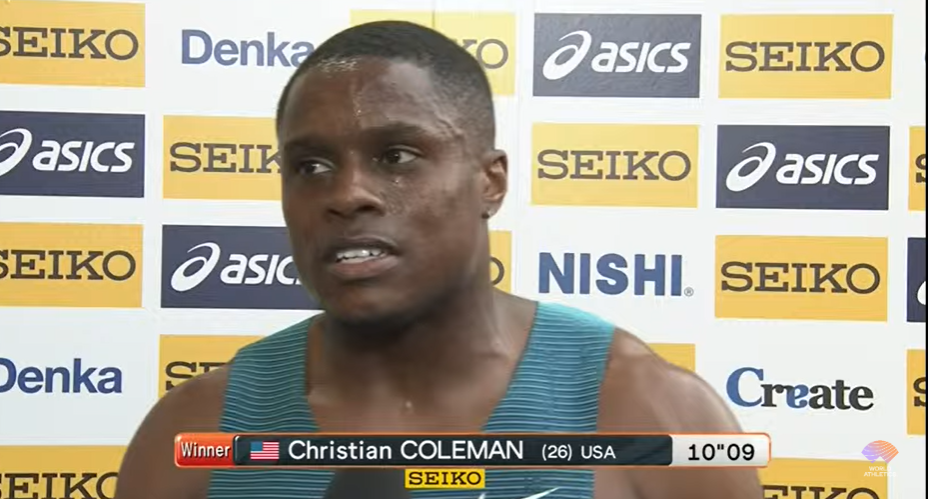 Christian Coleman marked his first 100 metres since winning the world title in 2019 with victory at the Golden Grand Prix today in Tokyo’s National Olympic Stadium, even though he looked less than comfortable in clocking 10.09 seconds.

Coleman, who missed last year’s Olympics in this stadium because of an anti-doping suspension following whereabouts failures, got a good start but finished less than convincingly a day after the 9.85sec victory for Kenyan sprinter Ferdinand Omanyala in the rarified atmosphere of Nairobi had topped this year's world list.

"The plan was to come out here, open up my season with a win and execute a good race and I feel I did that," Coleman said in a trackside interview.

"Now I need to get down to more work.

"It was my first time being here and it was an amazing atmosphere.

"I’m motivated and super-excited to defend my world title in Oregon this summer."

Coleman had moved safely through his heat without offering evidence of his normal electric start, closing down before crossing in 10.21.

Also absent from the stadium last summer, due to the pandemic situation, were spectators.

But an estimated 10,000 turned up today, wearing masks, to enjoy a top class competition.

Benjamin and Norman were returning to the stadium where they had won medals at Tokyo 2020 nine months earlier, and both earned solid victories as they competed for the first time this year in their specialist distances.

Both were part of the victorious United States 4x400m relay team in Tokyo, with Benjamin adding a silver in one of the greatest Olympic races ever seen as he ran the 400m hurdles in 46.17, breaking the world record that had existed before the race, only to finish second as Norway's Karsten Warholm improved his own mark to 45.94.

Benjamin won the 400m hurdles in 48.60, effectively in a race of his own, although Japanese champion Kazuki Kurokawa, who won at this meeting last year in a personal best of 48.68, pushed hard to the line to finish second in 49.08.

Norman was also untroubled in his main event for the first time in nine months as he won the 400m in 44.62, the seventh fastest run so far this season.

"I ran slow, it’s not what I wanted," Norman said.

"I’m really disappointed to be honest.

"The goal is to win gold at home in the Oregon World Championships, but looking at it right now there’s a lot of work that needs to be done."

The world record-holder takes it ✌️@Ken_AYE_ 🇺🇸 dominates the 100m hurdles field with a 12.76 victory at the @goldengrandprix!#ContinentalTourGold pic.twitter.com/BuM4Yljbpx

Kendra Harrison, world record holder and Olympic silver medallist in the 100m hurdles, was a clear winner, gathering speed over the closing stages after hitting the opening hurdle to cross in 12.76.

"I got silver at the last World Championships so the goal this year is to get gold on my home track," Harrison said.

Her United States compatriot, world indoor bronze medallist Gabbi Cunningham, dropped out of contention after hitting a barrier and finished third in 13.07 behind Japan’s Mako Fukube, who clocked 13.05.

Tokyo 2020 bronze medallist Megan Tapper of Jamaica was fifth in 13.30.

Ryuji Miura was one of Japan’s breakthrough performers last year when, still an under-20 athlete, he won the 3,000m steeplechase in this Continental Tour Gold event in a national record of 8:17.46 before going on to clock 8:09.92, earning a place in the Olympic final, where he finished seventh.

He rose to the challenge once again today as he finished five seconds clear of Kenya’s Kiplagat Ruto to win in 8:22.25.

Home thrower Haruka Kitaguchi earned a notable victory in the women’s javelin as she defeated Australia’s world champion and Tokyo 2020 bronze medallist Kelsey-Lee Barber, moving to second on this year’s list with 63.93 metres.

Lynna Irby of the United States, who left the Tokyo 2020 Olympics with a gold and bronze medal respectively in the women’s 4x400m and mixed relay, won the 200m with some ease in 23.09.

His compatriot Rachid Muratake won the 110m hurdles in 13.34.