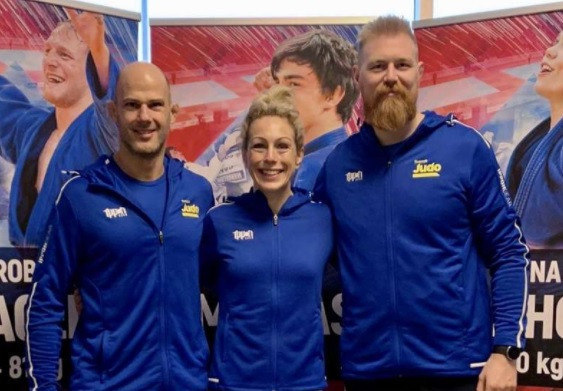 Olympic and world bronze medallist Sally Conway has been named as head coach of Sweden’s national judo team after being handed an "unexpected" opportunity.

Conway has been carrying out a coaching apprenticeship with JudoScotland after calling time on her professional career as a judoka last February.

The 34-year-old said she was happy to complete the two-year scheme before receiving a call from Robert Eriksson, who has stepped down as Sweden’s head coach after 17 years in the role.

"At first I was confused, as when he spoke to me about it I thought it was [my coach] Bill [Cusack] whom had been offered the role," said Conway.

"It was a bit of a curveball, unexpected.

"There has been a lot of conversation for the last few months.

"It's a big decision and a huge change for me but what an amazing opportunity."

Conway, who competed in the under-70 kilograms category, won a bronze medal on home mats in Glasgow at the 2014 Commonwealth Games.

Other career highlights for Conway included bronze at the Rio 2016 Olympic Games, bronze at the 2019 World Championships in Tokyo and gold in the 2018 Paris Grand Slam.

"I am so comfortable in Scotland and very happy but maybe it’s time to get out of my comfort zone again, now as a coach instead of an athlete," said Conway.

"These are the moments when we find out what we are really capable of.

"I will be one of two head coaches, working alongside Viktor Carlsson in Malmo, starting with nine athletes and expanding the provision to 15 after the summer.

"I will also be getting to know the cadets and juniors from the beginning, so that those relationships can form right from the start and make the transitions to senior judo more smooth for the judoka."

Eriksson has been appointed as high-performance director at the Swedish Judo Federation as he looks to restructure the national set-up.

"One important piece in the new structure was to bring in a new coach," said Eriksson.

"I was looking for somebody who has been present on a high international level and was also 'young' in their coaching life.

"Sally was, for me, a great match from the beginning.

"I know her as an athlete and she has the competence and hunger to start something new.

"I am very happy that Sally accepted the position and she will undoubtedly be a great inspiration for many athletes in Sweden."