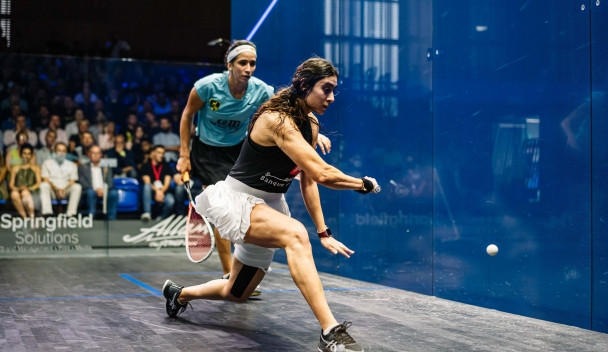 World number one Nour El Sherbini beat defending champion Nouran Gohar in a major final for the sixth time to win the British Open, while while New Zealander Paul Coll defied the odds to beat top seed Ali Farag and earn the men's title in Hull.

El Sherbini was a strong favourite over Gohar and the first game set the tone for the match, with both players pushing hard.

El Sherbini had the better of the early stages, taking a 5-2 lead with her clinical accuracy catching out Gohar.

The 23-year-old soon settled, though, and dealt El Sherbini a barrage of powerful drives.

El Sherbini struggled to adapt to Gohar's pace and the number two seed took the first game 11-9, winning the final point with a tremendous backhand.

The second game was characterised by unforced errors as both players traded points but eventually El Sherbini was able to pull away and win 13-11 to level the match.

Gohar then ruthlessly struck back in the third as El Sherbini allowed multiple errors to creep into her performance which helped Gohar speed into a 7-1 lead before eventually taking the game11-5.

El Sherbini then decided to take a more aggressive approach and pushed for winners in the fourth game.

The risky strategy paid off as she won 11-7 to force the match into its deciding fifth game.

El Sherbini put Gohar - who looked to have an injury - to the sword, winning 11-2.

🎙️ "He's done it! He's won the British Open!"@paulcollsquash has made history! 🏆

Later in the day, Coll became the first New Zealander to win the men's competition, upsetting Farag in four games.

The omens were in the Egyptian's favour as he had beaten his opponent in 13 of their previous 14 meetings.

Coll struggled to get going in the early stages with Farag easing to an 11-6 victory in the first game.

However, the number three seed found his feet in the second game and raced into a 7-1 lead by forcing Farag onto the back foot, going on to win 11-6 to tie the match.

Coll then had the wind in his sails and won 11-6 in the third game with Farag looking visibly stunned.

Farag pushed desperately in the fourth and was able to keep close to Coll after winning a number of gruelling rallies.

Coll, however, was content to trade long rallies with Farag, finally taking the match, and championship, with a well-deserved 11-8 victory in the game.