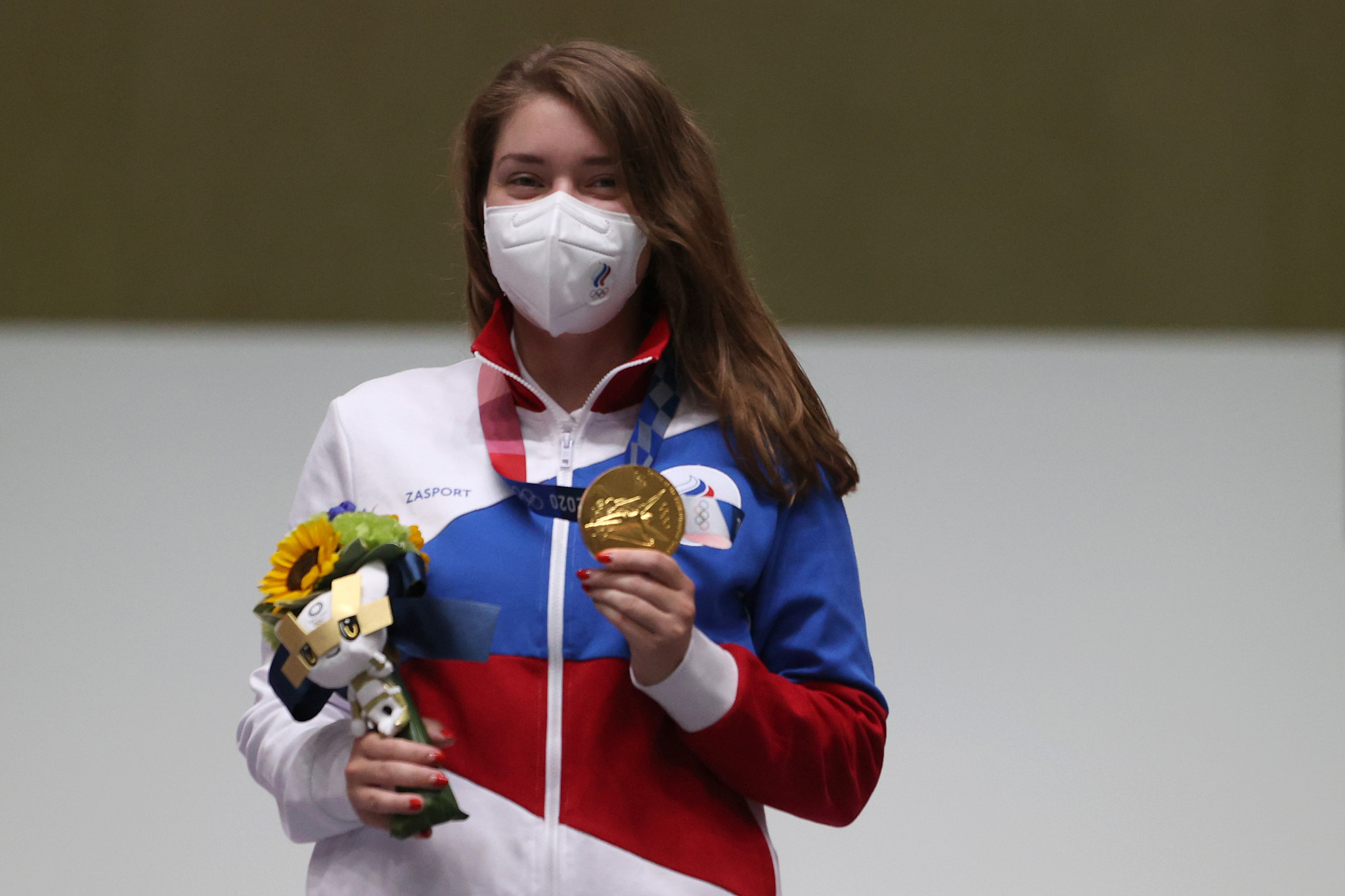 Vitalina Batsarashkina thanked the influence of her grandfathers after winning the Russian Olympic Committee's first gold medal of Tokyo 2020 yesterday.

After the fifth round of the final, the 24 yea-old from Omsk was almost out of contention after an electronics failure.

The scoring system did not register her shot inside the allowed 50 seconds, so the judges did not award a single point.

Batsarashkina was allowed to refire after the malfunction was discovered.

The shooter's mother told Russia's official state news agency TASS that her daughter became interested in the sport because of her grandfathers.

"We have two grandfathers - my father and my husband's father - both are avid hunters," said Irina Batsarashkina.

"Vitalina went hunting from the age of six, was introduced to this life, her grandfathers gave her the tools she needed to be successful early."

The Olympic champion now has her sights set on marriage.

"I hope there will be a wedding this year, because we have been planning for a very long time," said Vitalina Batsarashkina.

On Saturday (July 24), the first medal day of the Games, the team of ROC - as Russian athletes at Tokyo 2020 are being identified - had got off to a good start as shooter Anastasiia Galashina won the silver medal in the women's 10m air rifle.

She narrowly missed out on victory by 0.7 points to Qian Yanq of China, who put in a formidable performance, setting an Olympic record of 251.8.

Despite not taking the gold medal, Galashina was still delighted with her showing.

"At the firing range, immediately after the final shot, emotions were, I'd say, mixed," she said.

"But now there is only one feeling - great joy.

"In the final I tried to abstract from everything.

"I had to solve my problems, to realise what I had gained in four years.

"I am happy with the result.

"Today I made a big step forward.

"I don't plan to change anything in my program before the mixed competition.

"I would add composure, but I'll think about it tomorrow, with a cool head.

"Now is the time to accept congratulations.

"I haven't picked up the phone yet, but I think there are a lot of pleasant messages in it.

"Thank you all for your support."

On Saturday, the Russians also won a bronze medal in taekwondo courtesy of Mikhail Artamonov, while there also some impressive displays in 3x3 basketball, water polo and volleyball.

Artamonov secured his country's fifth medal in the sport, in the 58 kilograms category.

"Emotions are rather mixed, because at the beginning of the day I lost the fight and thought that there would be no opportunity for me to compete for the bronze medal," said the 24-year-old.

"But everything turned out as well as possible.

"The chance presented itself, and I decided that it was necessary to grab it with both hands.

"Honestly, there is no regret that I will leave Tokyo so quickly.

"I already want to come home, to be with my family and friends, to communicate, to do things that have accumulated."

The Olympic debut of 3x3 basketball was marked by a tense victory for the ROC team over hosts Japan.

The female quartet then held China to a single digit score line as they beat them in commanding fashion 19-9, just three hours after their opening fixture.

Water polo then saw another duel between the two countries.

Alexandr Gaidukov coached his side to a laborious 18-17 win with Svetlana Prokofieva bagging four goals.

"Matches at the start of the tournament are always very nervous and tense," said Andrei Belofastov, the senior coach of the Russian women's team.

"We assumed that the first two periods would be difficult, but we were sure that then we would be able to swim, outplay the rival.

"Frankly, this is a lot, not our level.

"First of all, it is necessary to strengthen the game in defence.

"It was important to win today.

"It is very pleasant that we managed to do this."

In fencing, however, the ROC team could not overcome the Chinese.

In the semi-finals of the women's individual épée, 19-year-old Aizanat Murtazayeva lost to Sun Yiwen, who went on to win the gold medal.

"From the age of 16, I began to attract Aizanat to adult competitions," said the head coach of the ROC fencing team Ilgar Mammadov.

"And its potential was already evident then.

"It is a pity that the young talent was left without a medal in the individual championship as fourth place is the most offensive.

"It is doubly disappointing that on this path she went through truly eminent rivals.”

Despite going home empty-handed, this is still an improvement on Rio 2016 for the ROC team where the athletes all lost their first round duels.

ROC's tennis players got off to a promising start.

In the men's singles Daniil Medvedev and Aslan Karatsev also progressed to the next round with win over Alexander Bublik of Kazakhstan and Tommy Paul of America, respectively.

"I have never played in such heat," Daniil Medvedev told reporters.

"But these are the Olympic Games, so you need to continue to struggle for a medal.

"We are not here to cry about the weather, which disturbed both of us.

"My job is to win every match.

"All those who came to Tokyo want to fight for the gold.

"But everyone knows who is the favourite of the tournament.

"Nevertheless, I will try my best to adequately represent my country on the court.”

As for the doubles, Veronika Kudermetova and Elena Vesnina overcame the German women Laura Siegemund and Anna-Lena Friedsam but Andrei Rublev and Karen Khachanov lost in three sets to the Americans Rajeev Ram and Frances Tiafoe.

Another highlight of the day was the confident 3-1 victory of the volleyball team over Argentina.

The ROC flag bearer, Maxim Mikhailov, at the previous evening's Opening Ceremony in the Olympic Stadium was lethal, scoring 17 points to put his opponents to the sword.

"I agreed in advance that they would let me go early [from the Opening Ceremony], and at about 11pm I was at home," said Mikhailov.

"But I still had to stand for three hours.

"There is a slight discomfort, but it's worth it.

"Not every athlete is honoured with such an honour, and I am very glad that I was entrusted with carrying the flag.

"Not tired, but on the contrary, I was charged with positive emotions from the atmosphere at the Stadium."

In table tennis, Yana Noskova won her first game the tournament in a bitter struggle with the Frenchwoman Prithika Pavade.