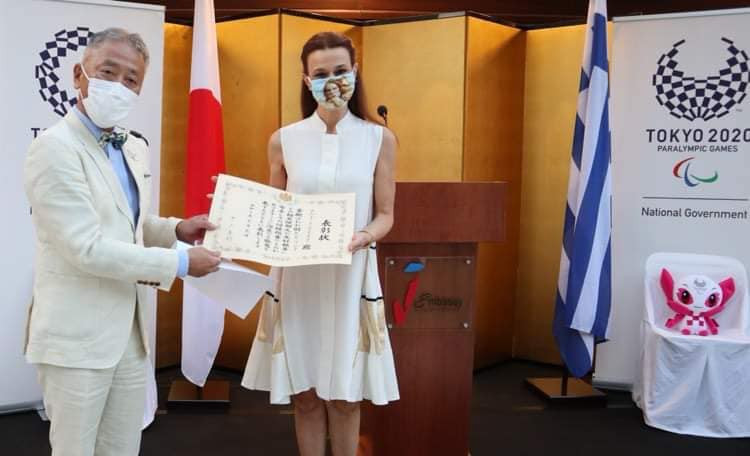 The Japanese ambassador in Greece has presented special awards to members of the team which lit the Olympic Flame for Tokyo 2020 in Ancient Olympia.

Yasunori Nakayama made the presentation to Flame lighting choreographer Artemis Ignatiou at the embassy in Athens.

It paid tribute to her "contribution to the lighting and traditional ceremony".

"It is with great honour and pride that I accept this award on behalf of the whole team of lighting and handover ceremonies of the Olympic Flame," Ignatiou said at an event held in the embassy garden to comply with COVID-19 precautions.

"We are proud that we succeeded in lighting and handing over the Olympic Flame for Tokyo under the difficulties of the pandemic.

"The message of the Olympic Games and of peace was once more spread to the world.

"We are very happy that the Tokyo Olympic Games will eventually take place and we wish you every success."

Torch Relay President Athanasios Vassiliadis was commended "for his extensive efforts to celebrate the Olympic Flame despite the ongoing pandemic".

High priestess Xanthi Georgiou was also recognised for her "impeccable presence in the ceremonies of the Flame".

The pandemic has had a major impact on the Tokyo 2020 Flame.

It was kindled in Olympia in March last year in front of no spectators, as COVID-19 precautions closed all archaeological sites in Greece.

The Relay in Greece was then suspended after crowds flocked around film star Gerard Butler as he carried the Flame in Sparta.

The official handover to Tokyo 2020 was also conducted in a truncated and socially distanced ceremony at the Panathenaic Stadium in Athens.

The passage of the Torch through Japan was delayed for a year after the postponement of the Games, which are due to open here on July 23.

But the Relay is now completing its first week in the Tokyo Metropolitan area, albeit with only brief  "alternative lighting format" ceremonies.

The majority of the Relay to the Opening Ceremony has taken place "off road" without involvement from the public, with the event a far more low key occasion when compared to other Games.

At Tokyo 1964 there was more to be excited about, with high priestess Aleka Katseli invited to Japan where she met cauldron lighter Yoshinori Sakai in the Olympic Stadium.