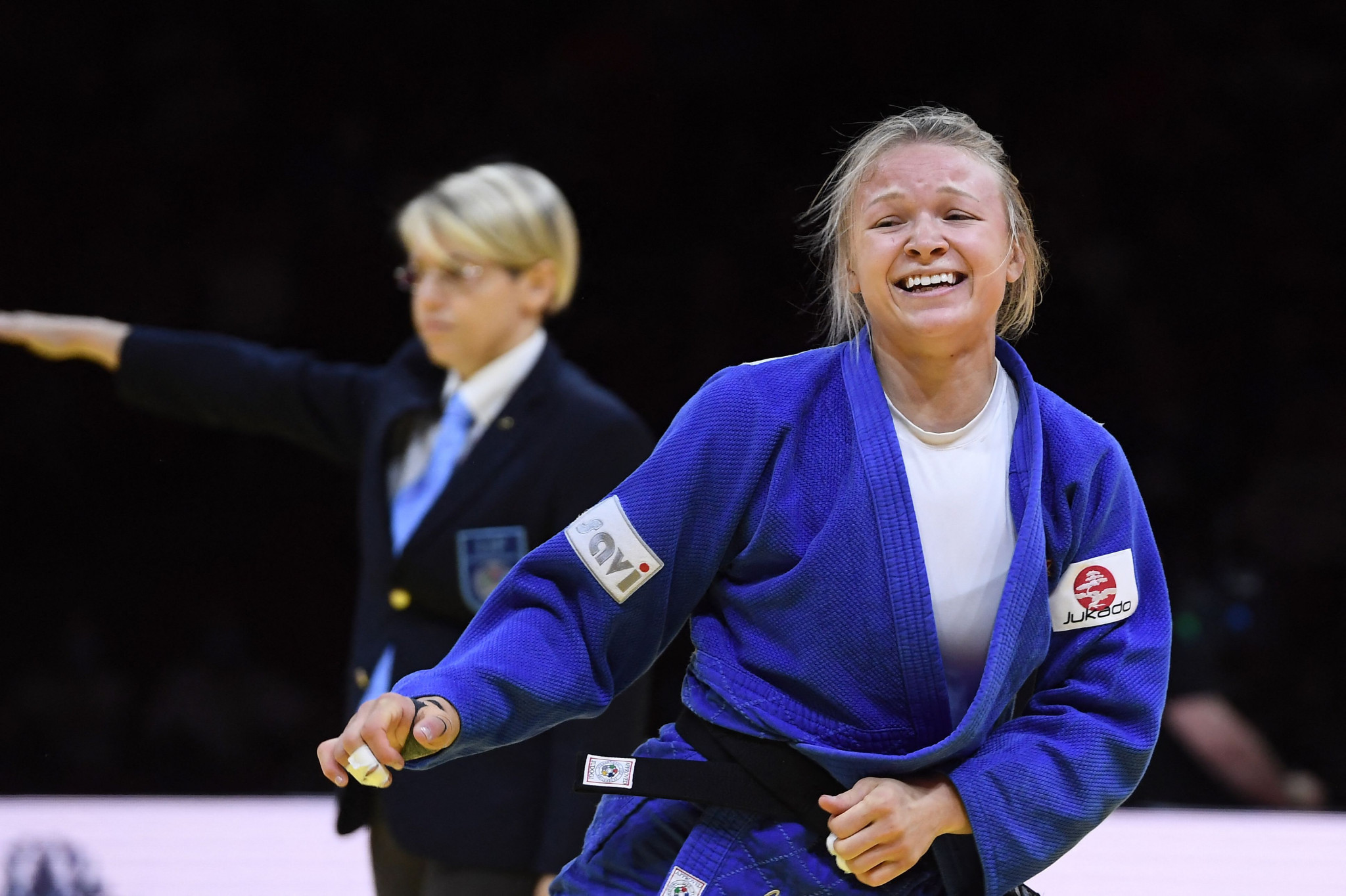 Klimkait was fighting it out with Christa Deguchi for a place at Tokyo 2020 and is now set to compete in the Japanese capital after taking her team mate’s world crown with victory over Momo Tamaoki of Japan in today’s final.

Deguchi arrived in the Hungarian capital as the defending champion but lost her title after suffering a semi-final defeat to Tamaoki and now faces missing out on a trip to Tokyo.

Theresa Stoll then added to Deguchi’s misery by beating her in their bronze medal bout, while Nora Gjakova of Kosovo also achieved a place on the podium after overcoming Marica Perišić of Serbia.

Lasha Shavdatuashvili of Georgia completed the set of world, European and Olympic crowns after seeing off Tommy Macias of Sweden in the men's under-73kg final.

Shavdatuashvili, a gold medallist at London 2012 and European champion in 2013, clinched the world title when Macias picked up his third penalty in the golden-score period.

After clinching golds in the opening two days, the Japanese team were unable to continue that record but still collected two medals with Tamaoki earning silver and Soichi Hashimoto capturing bronze with a win over Hayet Heydarov of Azerbaijan.

The other bronze medal was won by Turkey’s Bilal Çiloğlu after defeating Khikmatillokh Turaev of Uzbekistan.

The day started with a bang as the opening three bouts on mat two were all won by ippons as Nils Stump of Switzerland, Julian Sancho of Costa Rica and Adan Alexandre Hussein of Dijbouti took little time to get their campaigns off to winning starts.

There was plenty of home interest in the early rounds as the noise levels rose with every victory from a Hungarian judoka.

Nascimento came close to winning it as she was just three seconds away to securing a waza-ari in the golden-score period.

Roared on by the home fans, Karakas dug deep to keep the contest alive before clinching a memorable victory with an ippon.

Karakas was undone by Anastasiia Konkina of ROC in the next round, while fellow Hungarian Andrea Karman also fell at the third-round stage, losing to Portugal’s Telma Monteiro.

Hopes of a home medal then rested on the shoulders of Miklós Ungvári as he took out Faye Njie of Gambia before seeing off Tsogtbaatar Tsend-Ochir of Mongolia.

The 40-year-old is used to being in pressured situations having registered three European titles, three world bronze medals and an Olympic silver medal achieved at London 2012.

But Ungvári was unable to deliver success for his country on this occasion after losing out to Shavdatuashvili in an absorbing quarter-final battle that was finally won by the Georgian in the sixth minute of added time.

Ungvári entered the repechage in the hope of claiming a bronze but was defeated by Heydarov.

Ranked world number one, Hashimoto was looking to secure his fifth world crown having achieved three successive mixed team titles and an individual gold in the under-73kg category in 2017.

But Hashimoto suffered a shock defeat in an incident-packed semi-final clash with Macais.

The 29-year-old appeared to have the upper-hand in the contest against an increasingly weary Macais before being flung onto his side.

Macais was initially awarded a point for a waza-ari only for the video referee to overturn the decision.

But the Swede refused to be undone as he responded with another waza-ari to clinch victory over Hashimoto and set up a showdown with Shavdatuashvili in the final.

Competition is scheduled to continue tomorrow with the women's under-63kg and men's under-81kg preliminary rounds, semi-finals and finals.