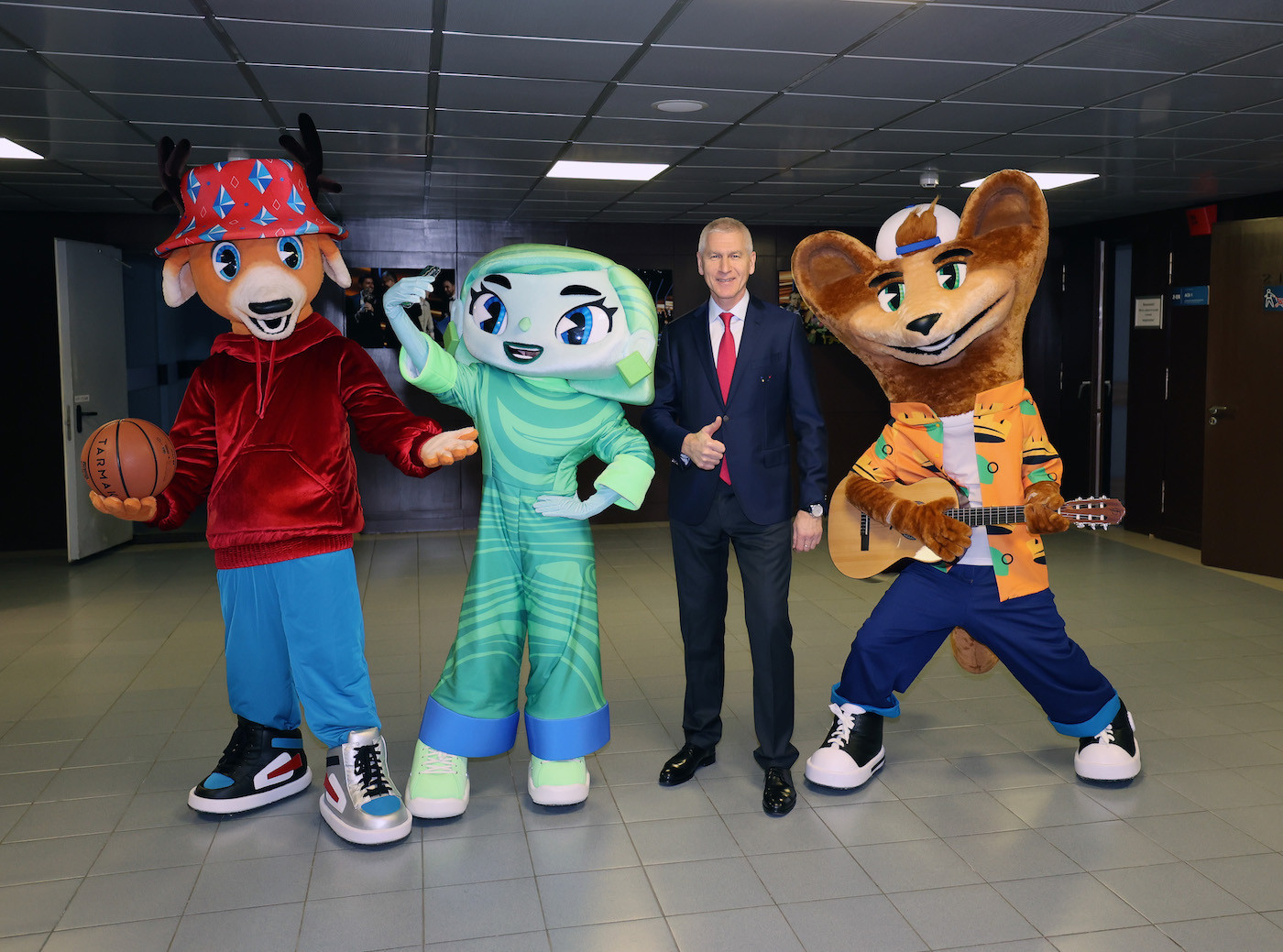 Yaggy, Heaty and Cedry have been unveiled as the mascots for the Yekaterinburg 2023 Summer World University Games.

More than 200 entries were received as part of the competition to design the mascots, with participants submitting images of 12 different animals.

The three animals selected are a deer (Yaggy), a malachite (Heaty) and a sable (Cedry).

The mascots were unveiled on Evening Urgant, a late-night Russian talk show.

Organisers describe the mascots as "modern and fun city dwellers."

Sable mascot Cedry is a guitarist and music fan, which is a reference to the Sverdlovsk Rock Club.

Cedry wears a yellow shirt with green accents as a reference to the emblem of Yekaterinburg 2023.

Malachite mascot Heaty is a blogger, who wears a green shirt to symbolise the patterns of the mineral gemstone.

Deer mascot Yaggy is a basketball player, whose appearance is inspired by the Russian fairytale Silver Hoof.

In honour of this one of Yaggy's boots is painted silver.

International University Sports Federation (FISU) President Oleg Matytsin was present for the mascot unveiling and added the moment was an important milestone in the build-up to Yekaterinburg 2023, scheduled to take place from August 8 to 19.

"It is the birthplace of outstanding athletes who have won the most prestigious awards for their country and hometown.

"Such achievements are impossible without a modern sports infrastructure, without the best coaches, without the support of the stands.

"I am confident that preparing for the World University Games will unite us, give us a new goal and motivation to learn about sports, watch sports, play sports and get better!"

The mascots have their own Instagram accounts, where they will communicate with fans and provide updates on preparations in the run-up to Yekaterinburg 2023.

Speaking about the mascots Matytsin said: "I really like these talismans, they are very funny and reflect the originality of the region and various trends in the youth environment," as reported by TASS, Russia's official state news agency.

"I hope that they will be liked and attract attention, will be a powerful locomotive, drivers of all activities before and during the Universiade.

"I am sure that they will appeal to the youth of both Russia and its guests."

Masks with images of Yaggy, Heaty and Cedry will also appear on the social media platform.

"In 2023, we will welcome thousands of young athletes and guests from all over the world," said the Governor of the Sverdlovsk Region Evgeny Kuyvashev.

"We have everything to make this an unforgettable event.

"Our task is to be as open as possible, to draw as many people, ideas, projects, businesses as possible into the orbit of the World University Games.

"The Games are, first of all, new opportunities and points of growth."

Head of the Yekaterinburg 2023 Organising Committee Alexander Chernov added the mascots would accompany the team through until the conclusion of the Games.

"They will meet the athletes, cheer the audience in the stands," said Chernov.

"They will tell the guests about the major events around the World University Games.

"They are an important symbol of the Games, and I sincerely believe that the characters turned out to be kind and lively, and will be received well around the world."

A countdown clock was also unveiled today as part of events marking 1000 days until the scheduled start of Yekaterinburg 2023.

The clock is located in Historical Square in the centre of the city at a ceremony also attended by the head of Yekaterinburg Alexander Vysokinsky, the rector of the Ural Federal University Viktor Koksharov, the President of the Russian Student Sports Union Sergei Seyranov, the head of the executive directorate of the Universiade 2023 Alexander Chernov and swimmer Yuri Prilukov.

"A thousand days is not much, during this time we will need to carry out a huge amount of work," said Vysokinsky.

"This is not only the construction of new facilities, but also new security structures, new structures in terms of transport and food.

"For the first time, a festival of cultures will be held within the framework of the Universiade."