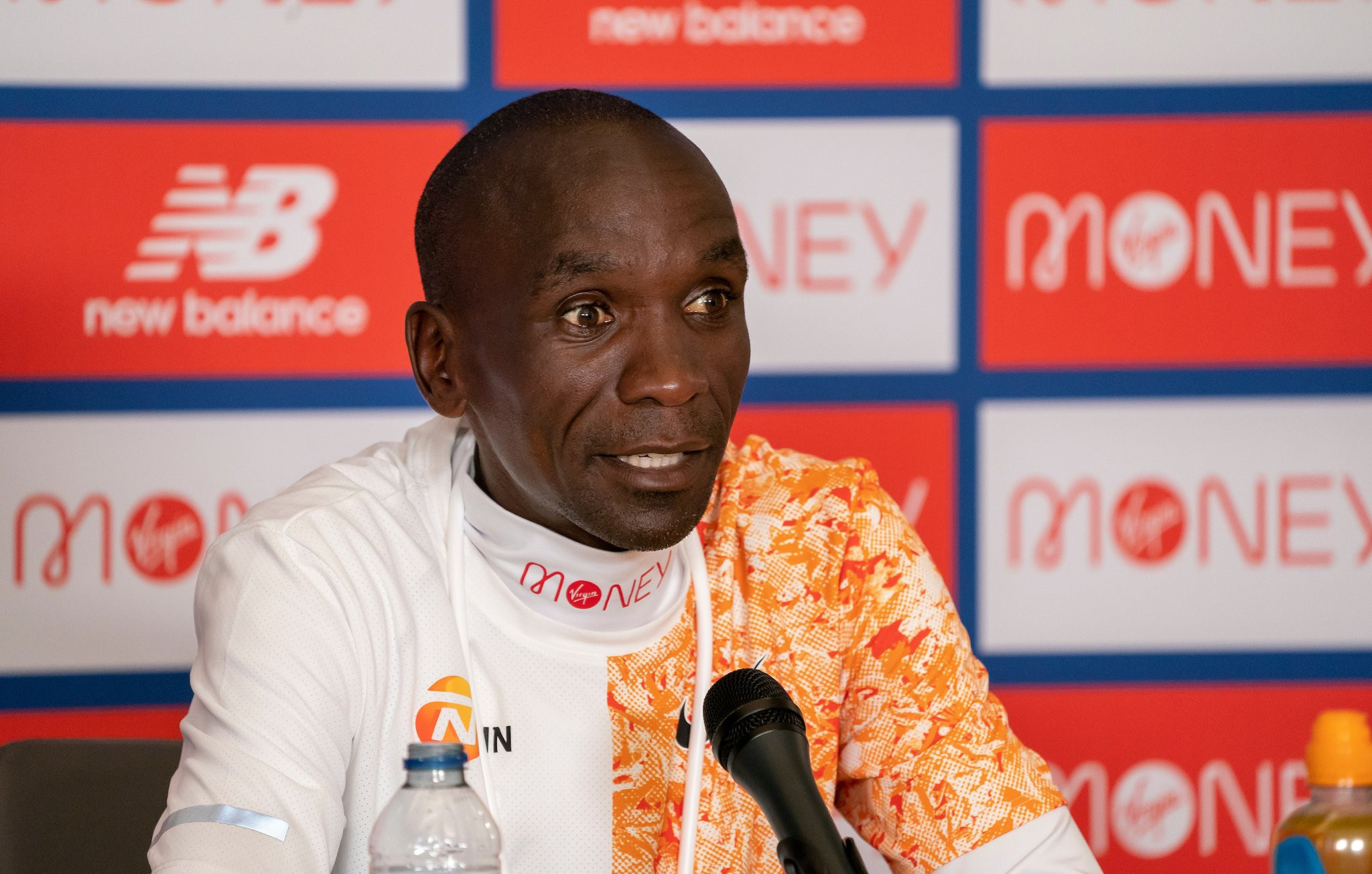 Eliud Kipchoge, who will seek to win a third consecutive Virgin Money London Marathon title on Sunday (October 4), today defended the controversial shoe technology developed by Nike which, it has been claimed, adds around four per cent to the average performance in marathon races.

While the shoes in which the 35-year-old Kenyan became the first runner to better two hours for the marathon in a specially arranged event in Vienna last October have since been deemed ineligible for competition by World Athletics, he will wear the latest legal version of the Alphafly Next% range as he takes on his Ethiopian rival Kenenisa Bekele.

Asked at a virtual London Marathon press conference if the new range of technologically engineered shoes accord with the spirit of the sport, Kipchoge, who ran 1 hour 59min 40sec in the Austrian capital, responded: "We live in the 21st century.

"First we need to accept change, and the second thing is the development goes hand-in-hand with technology.

"The shoe is good and an accepted technology pattern.

"I will give you one example - we are now doing a virtual press conference - is that not technology?

"So we need to accept technology in our hearts and move on."

Bekele, meanwhile, plans to wear a similar version of a Nike shoe in which he came within two seconds of Kipchoge's world marathon record of 2:01:39 in Berlin last year when he takes part in the London Marathon – because he has not got along with the latest version that will be worn by his rival.

Asked what shoe he would be wearing for the closed-loop men’s elite race in St James’s Park, over 19-a-half laps of a 1.3 miles circuit, Kipchoge – who set the official world record of 2 hours 01min 39sec at the Berlin Marathon in 2018 – said it would be Nike’s latest version of the Alphafly Next% range which have been custom-made for him in special Kenyan colours.

But Bekele commented: "With the Alphafly I have had some problems.

"I need more time to adapt.

"At the moment I am using the old one, the second version."

Asked if that was the same shoe he had used in running 2:01:41 in Berlin last year, he said: "Not quite the same – some difference."

As from April 30 this year, World Athletics ruled ineligible road shoes with soles that were thicker than 40 millimetres, and which contained more than one rigid embedded plate or blade.

The Nike Vaporfly range of shoes which have been on sale for the last four years were deemed to be sufficiently in the public range to remain within the rules, despite their claimed advantages in performance terms.

Shoes available for competition need to be available for general purchase for four months beforehand, although such shoes may be customised for aesthetic or medical purposes.

The shoe Kipchoge plans to wear on Sunday is of a design approved by World Athletics in February which has been available to buy since last September.

Neither man responded directly to the question, put several times in different forms, of whether they would be targeting the world record on the 1.3 miles closed loop course on Sunday.

Bekele said he would have preferred to have been running on a traditional marathon course.

"I think that is better," he said.

"With many laps, you sometimes get bored, repeating the same place so many times.

"If you have some difficulties with some place on the course, it is repeated many times."

Watch live as the two fastest marathon runners of all time get ready to go head-to-head on Sunday.#LondonMarathon #The40thRace https://t.co/Y7xVOiZHcj

The Ethiopian - three years older than his Kenyan rival at 38 - also questioned whether the constant curves in the course would detract from a swift time.

But Kipchoge affirmed that he and Bekele - both managed by the Dutch-based Global Sports Communications group - would demonstrate teamwork on the day.

"They say one is good, two is more better," he said with a smile.

"Teamwork is good - I am a crusader for teamwork.

"We are on the same team, we have the same management, and we share many things.

Asked by insidethegames about plans for pacemaking - and the suggestion that the race could go to the halfway point in around 61 minutes - neither was willing to be specific at this point, although Kipchoge commented: "61 [minutes] would be okay.”

Meanwhile, it has been reported by Kenya’s Daily Nation that some Ethiopian runners due to compete on Sunday had missed their flight connection in Addis Ababa.

While Bekele was among those taking the flight, some reports from Ethiopia indicate that "some athletes and a coach" missed the flight "due to personal issues".

London Marathon organisers also pointed out that the "Bump" device to monitor social distancing, which was worn by both Kipchoge and Bekele today around their necks, would not be carried by athletes during actual racing.