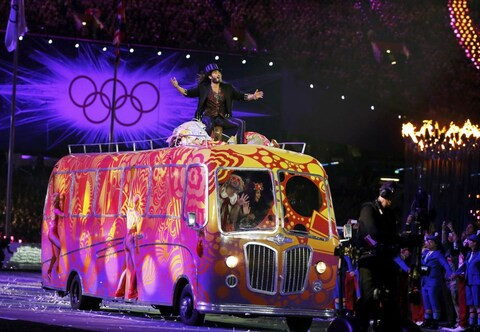 The psychedelic bus featured comedian Russell Brand dressed as Willy Wonka from Charlie and the Chocolate Factory climbing on the roof to sing the song Pure from the movie of the Roald Dahl classic and then The Beatles’ I Am The Walrus in front of an estimated worldwide television audience of 750 million people.

Brand had been accompanied on his journey in the bus by an array of glamorous women as he rode to the centre of the Olympic Stadium while using a megaphone to sing.

Once Brand had finished his unusual performance of the 1967 hit, the British star introduced Fatboy Slim, who had also been riding on the bus, and who really got the capacity crowd of 80,000 going by performing his well-known tune Right Here, Right Now.

After his performance, Brand admitted that he had ripped his trousers getting aboard the bus and then got his leg trapped as he tried to climb on to the roof to begin his performance.

Whoever buys the bus will need to do a lot of work on it to get it moving, however.

The eBay seller reveals in their description of the bus that the electric motors once fitted to it have been removed and that there is no roof or floor.

The steering wheel and brake system are intact.

"There is nothing on the inside, just metal framework sides drop down [that] would make great glamping or fast-food unit with a bit of work," the seller writes.

The London 2012 Closing Ceremony was billed as a celebration of British music and cost £20 million ($26 million/€22 million) to produce.

The Olympic Stadium was turned into a giant representation of the Union Flag, designed by artist Damien Hirst.

Around 4,100 people partook in the Ceremony, including some of the biggest names in musical history like Paul McCartney, Queen, Ray Davies, The Who, The Spice Girls, Madness and George Michael.