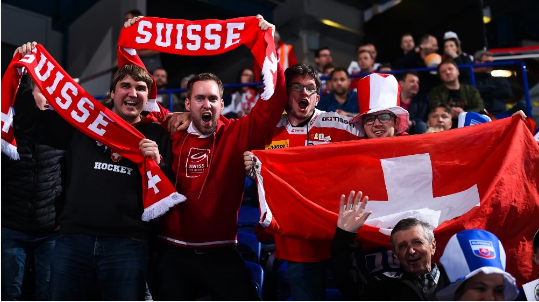 Ice hockey attendance figures "roared" in most European countries this season before venues had to shut to help prevent coronavirus from spreading, the sport’s world governing body has claimed.

The top 11 nations in terms of attendance in their top league all saw numbers increase, according to the annual European study carried out by the International Ice Hockey Federation (IIHF).

Switzerland’s National League had the highest attendance, with its average growing by 1.8 per cent to 7,074 fans, with the same 12 teams as last season.

The Lausanne Hockey Club was the biggest growth contributor as it opened its new arena, which is also a venue for the 2020 IIHF World Championship, and with the higher capacity increased its average to 8,548 fans.

Germany's Deutsche Eishockey Liga (DEL) occupies second place in Europe with a five per cent increase and 6,523 fans on average.

Eleven of the DEL's 14 teams had increasing numbers, including Kolner Haie, which took first place in the country with 13,333 fans on average.

The Russian-based, cross-border Kontinental Hockey League dropped to third place, despite an increase of 1.4 per cent to 6,486 spectators on average.

The Elite Ice Hockey League also saw its numbers go up significantly in the season after Britain’s successful stay in the IIHF World Championship.

The biggest increase was seen in Slovakia's Extraliga in the season after hosting the 2019 IIHF World Championship.

Denmark's Metal Ligaen had its numbers go up after staging the IIHF World Championship for the first time in 2018 and this season they increased again by seven per cent to 1,632 fans on average, moving up to 11th place.