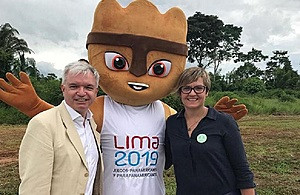 Britain were heavily involved in key infrastructure projects such as the Pan American Village and Villa Deportiva Nacional Videna cluster following a Government-to-Government Agreement, with a team of experts from the United Kingdom work closely with the Lima 2019 Organising Committee.

British politicians such as Prime Minister Boris Johnson, then Foreign Secretary, and Rona Fairhead, then Minister of State for Trade and Export Promotion, paid visits to the venues as they were under construction.

"It has been an honor for us not only to contribute with quality infrastructure in these Lima 2019 Games, but also in measuring the carbon footprint and preparing the guide on how to organise games in a sustainable way," said Menzies.

Menzies also confirmed that further collaboration between Peru and Britain will continue, especially in sectors such as infrastructure, climate change, renewable energies and sustainable mining.

Lima 2019, which took place from July 26 to August 11, introduced a number of measures to ensure the Games were "green".

In a bid to ensure the multi-sport competition was carbon neutral, then Peruvian Minister of Environment Lucia Ruiz announced that the event's carbon footprint would be measured, before compensating for it in protected natural areas.

In addition, establishments served food and drink at venues around the city did not give out single-use plastic bags, straws or styrofoam containers.