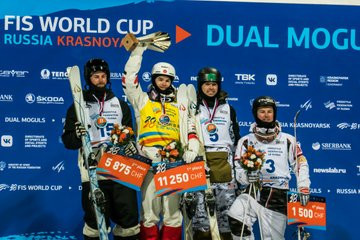 He scored 84.45 points to the 68.59 of Schofield, who became the first Briton to win a World Cup medal in moguls skiing.

"After I knew I was going to win it kind of released some pressure out of my shoulders and I started skiing a bit better," Kingsbury was reported as saying by The Canadian Press.

"This is one of the best venues I've competed at in my entire career.

"This is my third World Cup win in three starts in Russia.

"This place has been very good to me."

Perrine Laffont 🇫🇷 was on fire once again, taking her eight victory of the 2019/20 season in this epic matchup against Jakara Anthony 🇦🇺 in Krasnoyarsk on Saturday night 🔥🤩🥶 pic.twitter.com/2hUL2r47Js

Kingsbury now has an unassailable lead of 301 points in the World Cup standings.

He sits on 940 points, while nearest challenger Ikuma Horishima of Japan is second with 639 and Cavet third with 531.

In the women's event, France's Perrine Laffont came out on top for her eighth victory of the campaign.

The US's Jaelin Kauf got the better of compatriot Hannah Soar in the small final.

Laffont now has 896 points to her name at the top of the World Cup standings.

Anthony is second with 564 points, while Kauf is third with 470.

Action in Krasnoyarsk is due to conclude tomorrow with the men's and women's aerials events.