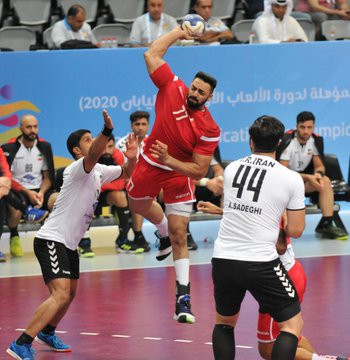 Bahrain beat Iran 29-26 today to make it two wins out of two in Group B at the Asian Men's Handball Olympic Qualification Tournament for Tokyo 2020 in Qatar.

Victory at the Duhail Handball Sports Hall in Doha means Bahrain need only a draw in their last match, against South Korea on Tuesday (October 22), to secure their place in the semi-finals.

Iran go up against Kuwait in their final game, also on Tuesday.

Action in Doha is scheduled to continue tomorrow with India facing Hong Kong and Qatar meeting Saudi Arabia in Group A.

Qatar and Saudi Arabia have already qualified for the semi-finals, taking place on Thursday (October 24).

The winner of their match will determine who finishes top of Group A, with a draw resulting in Qatar taking the honour by virtue of their superior goal difference.

The medal matches are scheduled for Saturday (October 26).

Overall victory in the eight-team tournament will ensure qualification for Tokyo 2020.

The runners-up have another chance to book a berth at the International Handball Federation qualification tournaments in April.