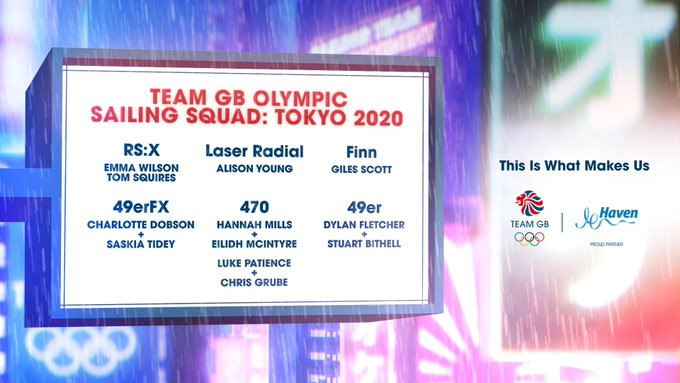 Olympic champions Hannah Mills and Giles Scott are among the first 12 athletes selected on the British team for Tokyo 2020.

All 12 are set to represent Britain in sailing events at next year's Olympic Games in the Japanese capital, following the announcement by the British Olympic Association at Rockley Park in Poole.

Mills, who won the 470 gold medal along with Saskia Clark at Rio 2016, and reigning Olympic Finn champion Scott headline the first sailors to be selected.

Mills will team up with new partner Eilidh McIntyre, making her Olympic debut at Tokyo 2020.

Patience will compete in the men's 470 class with Chris Grube, while Bithell will partner Rio Olympian Dylan Fletcher in the 49er class.

Charlotte Dobson returns in the 49erFX, joined by Saskia Tidey, who represented Ireland at Rio 2016 before switching allegiance to Britain in 2017.

Tom Squires and Emma Wilson are in line to make their first Olympic appearance in the men's and women's RS:X, respectively.

Alison Young, world laser radial champion in 2015, has also been named on the team.

"We are delighted to announce the first 12 athletes who have been selected to Team GB for the Tokyo 2020 Olympic Games," Mark England, Britain's Chef de Mission for Tokyo 2020, said.

"Sailing made its debut at the Paris 1900 Games and British athletes have excelled on the Olympic stage ever since.

"The sailors we have announced today have a wealth of experience, including reigning Olympic Champions Hannah Mills and Giles Scott and I look forward to seeing what they can do in Enoshima next summer."

Sailing competitions at Tokyo 2020 will be held in Enoshima from July 26 to August 8.