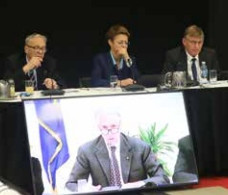 Italian National Olympic Committee (CONI) President Giovanni Malagò has confirmed he will lead the Organising Committee should Milan Cortina d'Ampezzo be chosen to host the 2026 Winter Olympic and Paralympic Games.

The presentations - which have in the past been made to all delegates at SportAccord - were made via video link behind closed doors with the media banned by the IOC from attending.

It came due to reduced delegation sizes as part of measures introduced to save costs in the bidding process for the Olympic and Paralympic Games.

CONI secretary general Carlo Mornati is be the sole Milan Cortina 2026 official at the summit.

Malagò, the CONI President, was among the Milan Cortina presentation team in Rome.

"If we win the Olympics, the President of the Organising Committee will come from CONI," he said, according to Italian news agency ANSA.

"Giancarlo Giorgetti, Undersecretary of State, has said it will be me.

"The chief executive, on the other hand, will be a manager with international skills who will be appointed in agreement with the local authorities."

SportAccord has previously been viewed as a key campaign milestone for bidders for the Summer and Winter Olympic Games.

Tokyo's presentation at the 2013 SportAccord Convention in Saint Petersburg was considered a turning point in the race and the Japanese capital was awarded the 2020 Summer Games less than four months later.

Presentations were not permitted for either Beijing nor Almaty, the two candidates for the 2022 Winter Olympics, in 2015 but Paris and Los Angeles staked their claim for the 2024 Summer Olympics in Aarhus two years later.

Both of the 2026 candidates received praise from International Federations following their respective presentations.

International Biathlon Union (IBU) President Olle Dahlin claimed the experience of both bids in hosting events would make it easier for them.

"We have two bids from two winter sport countries," he said.

"For biathlon there are two experienced nations in hosting events.

"There are two excellent bids from biathlon’s side.

"This will make it good and easier for our sport."

International Ski Federation secretary general Sarah Lewis revealed there had been no questions for the candidates.

"They are very well known to the Winter Federations," she said.

"They are active nations and sites in all our sports.

"We all have regular interactions."

Milan Cortina 2026 had earlier been backed by the Italian Government, with similar support from the Swedish Government arriving three days before the April 12 deadline.

Following the conclusion of IOC Evaluation Commission visits to the two bidders in recent weeks, their report is due to be published on May 24.

The publication will come one month before the final vote at the IOC Session in Lausanne on June 24.