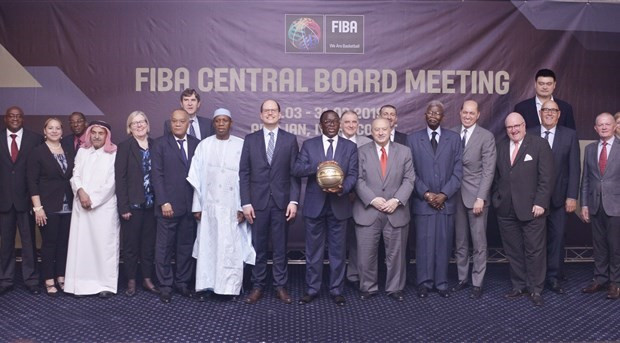 A joint Korean team is set to compete at this year's International Basketball Federation (FIBA) Women's Asia Cup, it has been announced.

The FIBA Central Board approved a "resolution in principle that would enable the two national federations from the Korean peninsula" to form a unified team for the tournament at its latest meeting in Abidjan in Ivory Coast.

The move marks the latest show of sporting diplomacy between two countries who are still technically at war.

It comes despite an apparent breakdown in diplomatic relations between North Korea and South Korea last month when the North abruptly pulled its entire staff from the joint liaison office in its border city of Kaesong near the demilitarized zone.

This followed a decision by the United States to sanction two Chinese firms for doing business with Pyongyang after talks between North Korean leader Kim Jong-un and US President Donald Trump in Hanoi in February ended early with no agreement.

Officials from North Korea have since returned to the office after Trump ordered the lifting of the sanctions but the development demonstrated the fragile nature of the relationship between South Korea and its neighbour.

The International Olympic Committee has insisted about unified Korean teams and marching together at the Tokyo 2020 Opening Ceremony will continue.

FIBA approving allowing a joint Korean team to participate at its Asia Cup, due to take place in September at a venue which has not yet been announced, comes after the two nations competed together in the women's basketball tournament at the 2018 Asian Games.

The unified Korean team claimed the silver medal at the event in Jakarta and Palembang in Indonesia.

They beat Chinese Taipei 89-66 in the semi-finals but lost the gold medal match 71-65 to China.

The two countries also participated in joint teams in rowing and dragon boat racing - where they won an historic gold medal - and marched together at the Opening and Closing Ceremonies of the Games.

North and South Korea had marched together in the Opening Ceremony of the 2018 Winter Olympic Games in Pyeongchang.

Seoul and Pyongyang have also declared their intention to submit a joint bid for the 2032 Olympic and Paralympic Games to the IOC, although discussions are in a very early stage.

North and South Korea are have expressed an interest in jointly hosting the 2023 FIFA Women's World Cup.