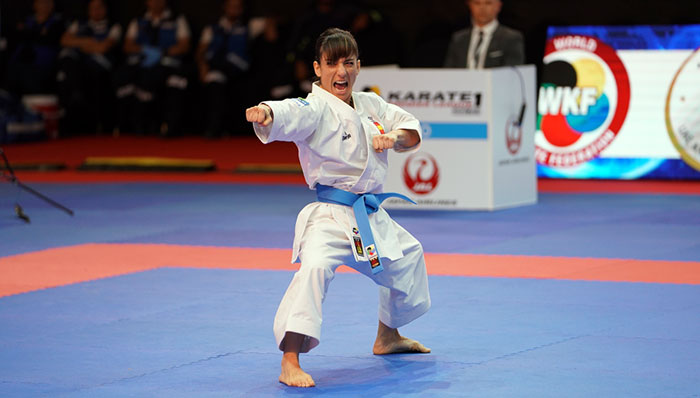 Spain’s Sanchez celebrated a fourth consecutive title at the competition in the United Arab Emirates city, seeing off the challenge of Japan’s Kiyou Shimizu.

"I am very happy because this gold medal gives me confidence after winning the title in the World Championships in Spain at home," Sanchez said.

"It also gives me hope to continue working this hard."

Shimizu triumphed in another battle between Japanese and Spanish athletes, continuing his recent winning run against Damian Quintero.

It was the third competition in a row where the duo battled for gold, with three-time world champion Kiyuna having also overcome his rival at the Karate 1-Premier League competition in Paris last month.

He avenged his loss to Quintero at last year’s Karate 1-Premier League event in the city.

France enjoyed a successful day in the kumite competitions, three of their athletes securing gold medals.

Steven Dacosta backed up his triumph last month in Paris as the world champion triumphed due to being the first to score in the men’s under-67 kilogram final after his contest with Kazakhstan’s Didar Amirali ended level at 3-3.

The hat-trick of titles was completed by Anne Laure Florentin in the over-68kg women’s final, as she beat Clio Ferracuti of Italy 5-2.

France’s Mehdi Filali was unable to added to France’s haul as he lost 5-2 to Japan’s Hideyoshi Kagawa in the men’s over-84kg event.

The third Karate 1-Premier League of the season is due to take place in the Moroccan city Rabat from April 19 to 21.