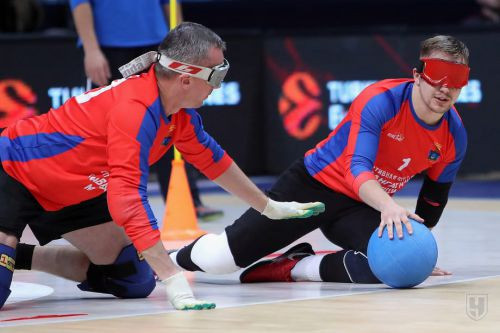 Goalball has been showcased to 4,000 people during a EuroLeague basketball match in Mytishchi in Russia.

Fans were treated to a half-time demonstration match between club teams Podmoskovie and Avangard at the Mytishchi Arena.

The presentation was organised by home team BC Khimki during their game against KK Budućnost of Montenegro.

The International Blind Sports Federation (IBSA) says it took place as part of a project to show the sporting prowess of local athletes and teams named "Stars of the Moscow region".

Goalball is claimed to be a leading Paralympic sport in and around Moscow.

The Podmoskovie Goalball League is one of the most successful in Russian Para-sports.

Seventeen teams contested the competition in the 2017-2018 season.

Russia’s national women's team are the reigning IBSA Goalball world champions having claimed the title in Swedish city Malmö in June of this year.

The IPC banned the RPC on the eve of the 2016 Paralympic Games in Rio de Janeiro following publication of the McLaren Report which claimed a total of 35 doping samples involving Russian Paralympic athletes between 2012 and 2015 were covered-up.

Last week, IPC President Andrew Parsons revealed the RPC has paid more than half of the outstanding fees owed to the IPC in order to have its suspension lifted.

It is the last remaining criteria Russia must meet if the IPC is to reinstate the RPC.

Parsons declined to reveal the exact number the RPC had paid but claimed he was "optimistic" the IPC would be given the full amount sooner rather than later.