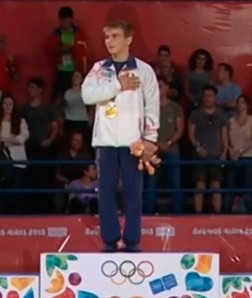 A special ceremony is due to be held by the National Olympic Committee of the Republic of Belarus (NOC Belarus) on Thursday (November 15) to commemorate the success of the eight medallists from the country at the Summer Youth Olympic Games in Buenos Aires last month.

The event, at the Hall of Olympic Glory in Minsk, headquarters of NOC Belarus, is set to be attended by all of the medallist and their coaches, along with Andrei Astashevich, first vice-president of the national governing body, and the Belarus Sports Minister Sergei Kovalchuk.

Taking pride of place will be judoka Artem Kolosov, winner of a gold medal in the men's under-55 kilograms category at Buenos Aires 2018.

Kolosov was also a member of the international squad that won a gold medal in the team event.

Bronze medals were won by Shkurdai in the 100m butterfly, Kristina Kontsevenko in the girls pole vault, wrestler Natalia Varakina in the girls 49kg and Ilya Fomenkov and Victoria Akhotnikova, both part of an international team in acrobatics.

At Singapore in 2014 - the very first Summer Youth Olympic Games - they had won five medals.

That was made up of four silver and a bronze.