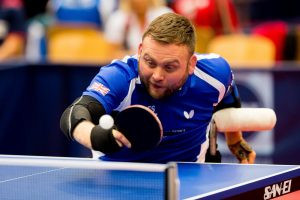 Davies put his below-par performance at last month’s Czech Open behind him with a convincing 11-5, 11-2, 11-4 victory over world number 17 Alan Papirer of France at the Zlatorog Arena.

He is due to play Pan American champion Fernando Eberhardt of Argentina in his second men’s class one Group B match tomorrow.

"It was good to win 3-0 but I’m happy with the way I played more than anything.

"I managed to keep my focus which was the main thing.

"I want to keep improving and if I can keep in the tournament I think I will get better and better."

Bayley, meanwhile, begun the defence of his men’s class seven title with a four-set triumph over Czech Republic’s Daniel Horut in Group B.

"I’m really happy to come through that because there was one point in the match where I thought 'this is very difficult' and I was struggling a bit," Bayley said.

"I was playing really well but tactically not as well as I could have done, and Daniel was playing probably the best he’s ever played against me today, so it took me a bit by surprise.

"The first match is always the toughest and I’ve got another tough one coming up.

"Every game is a final for me and I’ve got another final tomorrow, so we’ll see what happens."

The 2018 ITTF Para World Championships are due to finish on Saturday (October 20).