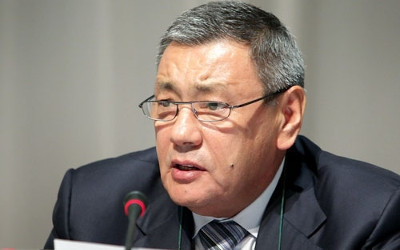 Gafur Rakhimov is set to be confirmed as the only candidate to stand for President of the International Boxing Association (AIBA) after his sole rival, Kazakhstan's Serik Konakbayev, allegedly failed to get enough letters of support, insidethegames understands.

The list of candidates is due to be officially published by the Lausanne-based AIBA tomorrow.

Konakbayev, an Olympic silver medallist representing the Soviet Union at Moscow 1980, is planning to appeal against the decision to the Court of Arbitration for Sport (CAS).

He is expected to claim he did have enough backing but missed the deadline on September 23 - a Sunday -  to file the necessary letters from at least 20 countries supporting his candidature by only a few hours.

But, the almost certain election now of Rakhimov, who has been serving as the Interim President since January, at the AIBA Congress in Moscow on November 2 and 3 will put boxing on a collision course with the International Olympic Committee (IOC).

They have consistently warned that the election of Rakhimov, described by the US Treasury as "one of Uzbekistan’s leading criminals", would put boxing's place on the Olympic programme at Tokyo 2020 in serious jeopardy.

The matter is expected to be discussed by the IOC Executive Committee when it begins a two-day meeting here tomorrow.

The proposed election of Rakhimov has led to AIBA tearing itself apart.

A campaign has been led by Wales' AIBA Executive Committee member to get European Boxing Confederation President Franco Falcinelli banned after the Italian wrote a letter calling on the sport to back the candidature of Konakbayev because of fears the election of Rakhimov could lead to boxing losing its place in the Olympics.

The AIBA Executive Committee has voted to refer Falcinelli to the AIBA Disciplinary Commission over claims of alleged disciplinary breaches.

They also voted to suspend Falcinelli from his membership of the AIBA Executive Committee, the EUBC and all other AIBA-related activities.

He had been expected to stay in that role until a permanent replacement was elected but unexpectedly stepped down in January to allow Rakhimov to assume the role.

insidethegames has been told that Falcinelli plans to bypass CAS and instead appeal directly to the Swiss Federal Tribunal in Lausanne to get his suspension overturned.

"Now it is up to the National Federations to make the final decision, but the Executive Committee needed to act now, especially as this situation has threatened to influence the upcoming election for AIBA leadership positions," Tom Virgets, the AIBA executive director, said.

"The Executive Committee simply felt that enough was enough in terms of misinformation and deceit in a time where everybody in AIBA should be working together for the best of boxing."

insidethegames has contacted Konakbayev and Falcinelli for comments.