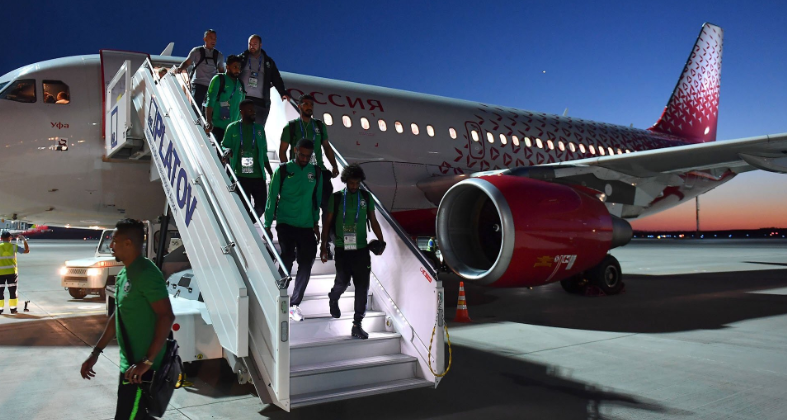 The Saudi Arabian Football Federation posted on Twitter after their landing saying how they would "like to reassure everyone that all the Saudi national team players are safe, after a technical failure in one of the airplane engines that has just landed in Rostov-on-Don airport, and now they’re heading to their residence safely".

A later post added: "According to the Saudi Arabian Football Federation, all the Saudi national team players have arrived safely in Rostov-on-Don this afternoon to play against Uruguay, and currently are staying in their residence.

"The fire was merely an accident."

Photos were posted of the team's arrival and of players smiling as they exited the plane.

But videos seeming taken on board the plane appeared to show flames emerging from underneath one of the wings.

Airline Rossiya claimed that the preliminary cause of malfunction was a bird flying into the engine.

Both appeared to be working by the time the plane landed, however.

In 2009, all 155 passengers and crew on board US Airways Flight 1549 survived after a crash-landing in the Hudson River after the plane flew into a flock of geese at low altitude - disabling both engines.

Saudi Arabia were thrashed 5-0 by Russia in the opening match of the World Cup in Moscow last week.

They are playing Uruguay tomorrow in their second match in Group A.