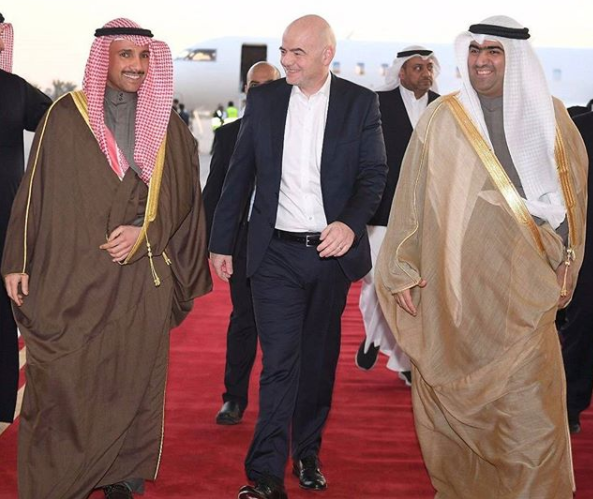 Kuwait's suspension from FIFA has been lifted following an unannounced visit by its President Gianni Infantino.

The decision was supposedly made following the approval of new Sports Laws in the country bringing them back into line with FIFA Statutes.

insidethegames understands, however, that the deal was negotiated following extensive lobbying by Government representatives from Qatar.

They were thought to be desperate for the ban to be lifted so that Kuwait could participate at the Gulf Cup of Nations due to begin in the 2022 FIFA World Cup host nation on December 22.

Bahrain, Saudi Arabia and the United Arab Emirates have all announced their withdrawal in the aftermath of them cutting ties with Qatar following accusations that the nation is supporting terrorism, a claim they have denied.

Five teams are required to permit the tournament to go ahead.

"The Bureau of the FIFA Council has today lifted the suspension that was imposed on the Kuwait Football Association in October 2015 for its failure to comply with its obligations stipulated in articles 14 and 19 of the FIFA Statutes," said a statement from the world governing body.

"This decision has been taken following official confirmation to FIFA that the Kuwait Parliament has adopted a new Sports Law of Kuwait, which replaces all the previous ones and has been amended in order to be fully compliant with the FIFA Statutes and requirements."

Infantino met only with Government officials during his visit, including acting Sports Minister Khaled Nasser Al-Roudan, but did not meet with representatives from the Kuwait sports community.

Kuwait - which has remained largely neutral in this year's Gulf tensions - was suspended by FIFA as well as by other organisations, including the International Olympic Committee (IOC), in 2015 following the introduction of a controversial law which supposedly violated sporting autonomy.

It also broke Kuwaiti compliance with international sporting organisations such as the World Anti-Doping Agency and the Court of Arbitration for Sport.

Concerns still remains, however, as to whether the laws have really changed after difference were pointed-out between how they were written in English and in Arabic.

In the Arabic version, there was no mention of WADA compliance or of independent sports arbitration.

There has also been no indication that ongoing legal proceedings in Kuwait against FIFA, the IOC and other sporting bodies has been dropped - as had been required.

The IOC reveaed that the issue of Kuwait's suspension has not been discussed at their Executive Board meeting here today.

Kuwaitis competed as "Independent Olympic Athletes" at Rio 2016 and are expected to do so again at Pyeongchang 2018.