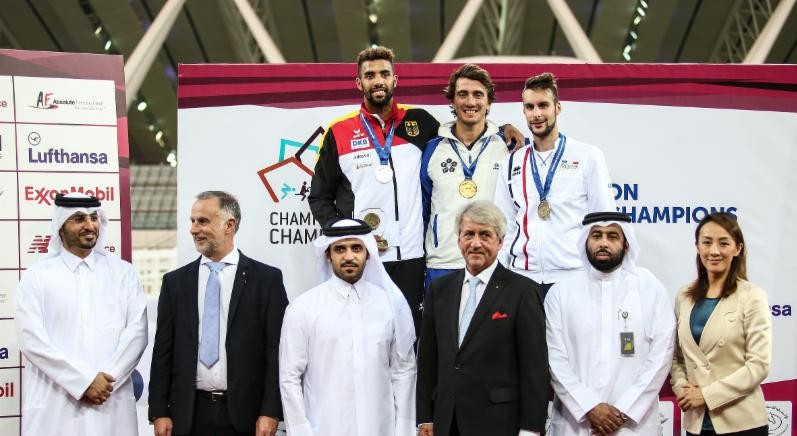 De Luca, the European champion in 2012 and winner of the World Cup final in 2015, missed most of the 2017 season after he narrowly failed to reach the podium at last year's Olympic Games in Rio de Janeiro, finishing fifth after a sprint finish.

The Italian was so strong today that the 2016 Champion of Champions, Patrick Dogue of Germany, had to settle for the silver medal, despite a very impressive performance of his own at the Qatar Foundation Recreation Centre and Al Shaqab Arena.

De Luca used his fencing prowess to take control of the competition.

He took the lead after a score of 22 wins and eight defeats with Olympic champion Alexander Lesun of Russia proving his closest challenger on 20 wins and 10 defeats.

Each of the main contenders stayed on course for the podium during the riding, Lesun incurring the most damage with 18 penalty points.

Dogue and Colasanti enjoyed the only two clear rounds as De Luca dropped only six points to ensure he would start the laser-run first.

The leader had a 17 second advantage over Colasanti, whose nerves on the shooting range ultimately cost him a medal.

Belaud started sixth but made up lots of ground and moved into third place after the second shoot as Lesun began to drift back.

De Luca and Dogue moved unchallenged through their laps and crossed the line in first and second respectively.

Colasanti fought tenaciously to catch Belaud in third, only for his efforts were ultimately in vain as the Frenchman sealed bronze.