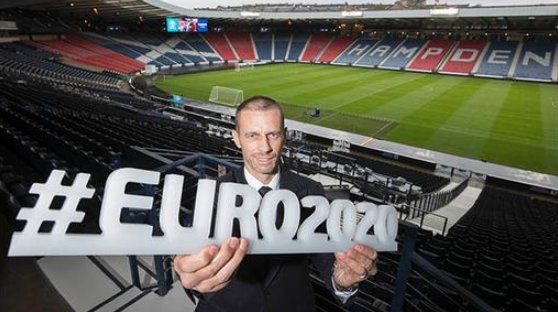 Hampden Park is due to play host to three group stage matches and a round of 16 games for the championships to be held in 13 different cities across Europe.

New LED giant screens have been installed inside Hampden Park, in addition to 26 new skyboxes that have been constructed across the South Stand.

Two sky lounges have also been fitted-out in the North Stand to enhance the hospitality experience in line with tournament requirements.

"UEFA EURO 2020 will be an exceptional tournament with 13 countries all contributing to hosting the competition," said Čeferin.

"Glasgow is a fantastic footballing city steeped in tradition and Hampden Park will provide the perfect setting for four matches."

In conjunction with the Scottish Government’s Women and Girls in Sport week, Ceferin also met the players and staff of Pollok United Soccer Academy at a training session, in alignment with UEFA’s #EqualGame campaign.

#EqualGame is a new UEFA Respect strategy aiming to "positively promote inclusion, diversity and accessibility in football throughout Europe".

"Glasgow and Hampden Park will be an important part of the UEFA European Championship finals, celebrating 60 years of one of the most exciting and unpredictable tournaments in world football and preparations are already under way," added McRae.

"The new giant screens have helped the stadium to become more interactive with spectators and the newly renovated skyboxes have helped improve our ever impressive hospitality services on a game day.

"These new facilities have been pivotal in the stadium recently winning two prestigious hospitality awards."

Wembley Stadium in London is scheduled to play host to the Euro 2020 semi-finals and final.

A door has been opened towards Wales or Sweden hosting matches after concerns over whether the proposed stadium in Brussels will be ready in time.

The proposed 60,000-capacity Eurostadium in Grimbergen, north of Brussels, is due to stage matches but is yet to be built.

UEFA will now make a final decision on December 7.

The decision is likely to depend on whether Belgian officials can prove that they have all necessary permits to begin stadium construction by November 20.