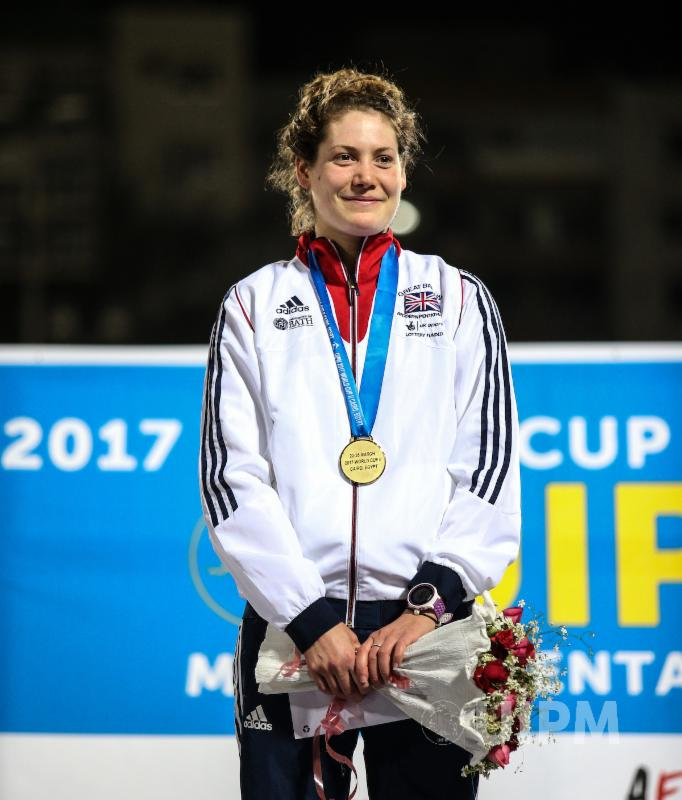 Kate French of Great Britain was an emphatic winner in the women’s individual final at the International Modern Pentathlon Union (UIPM) World Cup at the Cairo International Stadium today.

The 26-year-old, who finished sixth at the Rio 2016 Olympic Games, claimed her maiden World Cup title with 1,356 points only four weeks after winning silver at the previous event in Los Angeles.

Turkey's Ilke Ozyuksel began the laser run in 19th place but breezed through the field to clinch second in 1,326, her career-first World Cup medal.

Italy's Alice Sotero edged her compatriot Gloria Tocchi to secure bronze with a score of 1,313.

Honours in the pool went to Gulnaz Gubaydullina of Russia, who produced the fastest time of two minutes 08.56 sec.

French dominated the fencing stage, finishing the ranking round with an exceptional 29 victories from 35 duels.

She then went on to defeat Egypt's Haydy Morsy in the final bout of the bonus round.

French maintained her lead through the riding discipline, but not without conceding some ground.

A total of 14 penalty points saw her go into the final stage with an advantage of 17sec over Sotero with Kovacs and Lithuania's Ieva Serapinaite a further 3sec adrift.

The British star's lead proved insignificant, however, as she produced an immaculate performance on the shooting range and looked at ease around the 4x800 metres course.

The result sees French move up to fifth in the world rankings and complete a career set of World Cup medals following her silver medal in Los Angeles and bronze medal in Florida in 2015.

"My fencing went really well and I got a massive personal best today, which gave me a head start," said French.

"I've started to drink coffee in the morning of an event which wakes me up.

"But seriously, I think I was just really relaxed today.

"Rio gave me experience and confidence and now I'm just really enjoying it."

Sotero found herself in second position for much of the race only to find Ozyuksel sprint past her on the penultimate lap.

The Italian was then overtaken by Tocchi at the final shooting series, but managed to stay within touching distance and overtake her to clinch third place.

The mixed relay event is set to bring the World Cup in Cairo to a close tomorrow.

Egypt are holding the event ahead of the country staging the World Championships later this year in Cairo.