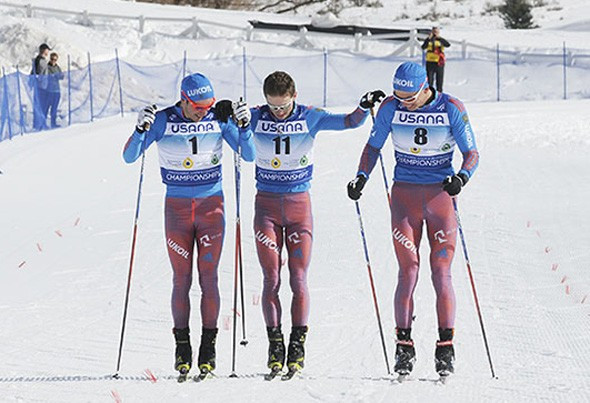 Alexander Bolshunov led a Russian clean sweep for the second time this week at the International Ski Federation (FIS) Nordic Junior World Championships after winning the men’s under-23 2x15 kilometres skiathlon in Park City in the United States today.

The 20-year-old clocked a time of 1 hour 15min 31.5sec to hold off the challenge of Alexey Chervotkin and Denis Spitsov in a repeat of the men’s under-23 15km freestyle podium from Thursday (February 2).

Chervotkin finished 0.2 seconds behind at the Soldier Hollow ski resort, while Spitsov was 0.5 seconds off the pace.

The trio had skied together for nearly the entire race, well ahead of a chase group made up of France’s Jules Lapierre and Switzerland’s Jason Rueesch.

As they reached the finish line, they stopped in unison and sought to cross together.

The competition jury reviewed timing and scoring records, along with photos and records of the finish referee, to ensure that the ranking was correct.

According to FIS rules, the boot toe crossing the line is the determining factor.

In the women’s under-23 2x7.5km skiathlon, Norway’s Lotta Udnes Weng came from behind to overtake Finland’s Johanna Matintalo and triumph with a time of 40:50.9.

On the last climb before dropping into the stadium, Weng made a final push to take the lead held by Matintalo and never looked back.

"The Finnish girl went very fast in the classic, but I knew I would be better in skate," Weng, a six-time junior worlds medallist and first-time under-23 competitor, said.

"I was just trying to hang behind the girls.

"I knew I would have a good sprint and I was just trusting it."

There was also action at the Utah Olympic Park today as Germany’s Vinzenz Geiger won the men’s HS100/5km Nordic combined title with a time of 12:14.9.

Geiger took a four-second lead into the 5km race, eventually extending his winning margin to 22.6 seconds over Finland’s Arttu Mäkiaho, who outsprinted France’s Laurent Muhlethaler at the line for the silver medal.

"It just feels amazing to be junior world champion now," the German said.

Action at the FIS Nordic Junior World Championships is due to conclude tomorrow with the men’s junior 4x5km and women's junior 4x3.33 km cross-country relays, and the mixed team HS100 ski jumping event.