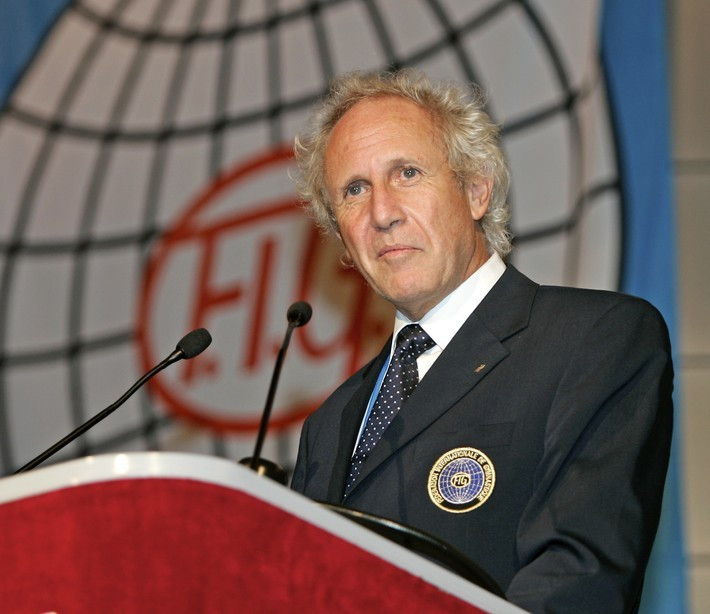 International Gymnastics Federation (FIG) secretary general André Gueisbuhler expects the new President of the worldwide governing body to build on the platform laid by the retiring Bruno Grandi rather than installing sweeping changes to the organisation.

Gueisbuhler, a member of the Executive Committee and the Presidential Commission, told insidethegames he is not anticipating either candidate to become Grandi’s successor to "make any breaks or revolutions" when they take up the role later this year.

European Union of Gymnastics President Georges Guelzec and Japanese Gymnastics Association secretary general Morinari Watanabe are the two names in the running to become just the ninth President of the FIG since it was established in 1881.

Sixty-eight-year-old Guelzec and Watanabe, 57, arrived here yesterday before a two-day Executive Committee meeting, which began today and precedes the official opening of the 81st FIG Congress on Tuesday (October 18).

They will both be lobbying the Member Federations of the FIG over the coming days ahead of Wednesday’s (October 19) election.

Improving the status of the organisation within the International Olympic Committee (IOC) - Grandi served as an IOC member from 2000 to 2004 but there is currently no FIG representation on the body - is one of Watanabe's key campaign pledges.

He also hopes to persuade Tokyo 2020 sponsors to partner with the FIG and get gymnastics to the "number one spot on the list of global sports" ahead of football.

The Frenchman is also targeting getting all five gymnastics disciplines onto the Olympic programme.

Currently, only rhythmic, artistic and trampoline competitions are staged at the Olympics.

All five disciplines were showcased simultaneously for the first time in the sport’s history at the inaugural European Games in Baku last June, while acrobatic gymnastics was recently added to the Buenos Aires 2018 Youth Olympic Games.

Gueisbuhler pointed to a number of reasons why he believes Grandi, elected as the head of the FIG in 1996, will leave behind a "great legacy" to either the Frenchman or the Japanese.

“I don’t think we will have major breaks or major revolutions," he told insidethegames here.

"Of course there will be change and it is important that things do change but I also think we have a great legacy from the President who leaves us.

"He has been the one who has brought the FIG forward in many ways."

Gueisbuhler singled out the development work Grandi has overseen during his tenure in charge, as well as a system which both rewards and sanctions judges for their performance.

"His great enthusiasm and vision for the sport led to getting us into the first group [at the Olympic Games] with athletics and swimming," he added.

"He has established academies, which take place all over the world, and launched the development of age group programmes.

"He has tried to change the mentality to not only have good and safe sports but to have sports justice.

"In that field he has introduced major changes for better judgement and for the control of judgement, giving awards to good judges but also sanctioning those whose heart beats a little too much for their own country.

"A new President is not going to break with all these traditions and will make sure we maintain this position and further develop the base on which the old President has set."

The FIG secretary general was speaking ahead of the Congress, where a number of topics aside from the elections of various other officials, such as three vice-president and seven Executive Committee members, are on the agenda.

Bringing the FIG statutes in line with the good governance procedures introduced by the IOC Agenda 2020 reform package and how best to eliminate any conflicts of interest will also be discussed during the Congress, which concludes on Thursday (October 20).